The round-robin for the NFC East title begins with Dallas at Washington on Sunday. The Cowboys (8-4) enter in first place, with Washington (6-6) and the idle Philadelphia Eagles still in the hunt.
Listen now to WTOP News WTOP.com | Alexa | Google Home | WTOP App | 103.5 FM
(1/1) 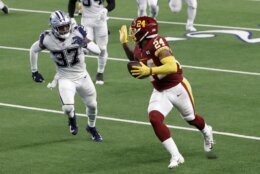 McCarthy’s Dallas Cowboys have a shot at the top seed in the NFC with four of five games left against East Division opponents. Washington has won four in a row to move into the thick of the playoff race, which is exactly what Rivera wanted from his team with five NFC East matchups left.

“We’re in a round-robin,” Rivera said. “You have that opportunity, you control it, so you’ve got to go out and do your job.”

The round-robin for the NFC East title begins with Dallas at Washington on Sunday. The Cowboys (8-4) enter in first place, with Washington (6-6) and the idle Philadelphia Eagles still in the hunt.

“I love the gantlet of this division stretch,” McCarthy said. “This is going to give us everything we need as a football team to be the best that we can be.”

The Cowboys have been good even without running back Ezekiel Elliott fully healthy. Elliott has been held under 50 yards rushing in four consecutive games for the first time in his career, and Dallas is 2-2 during this stretch, including an overtime loss to Las Vegas.

Washington followed a four-game skid with a four-game winning streak, riding a strong running game and improving defense into a wild-card spot. It’ll be the first time since the 1995 Tampa Bay Buccaneers that a team finishes the regular season with five consecutive division games.

“These division games are almost like the rivalry games where you have Auburn-Alabama where on paper, Alabama should beat them by 20, 30 points,” quarterback Taylor Heinicke said. “You just know with these division-slash-rivalry games that anything can happen. And we got that five weeks in a row.”

Teammate Daron Payne, who played in the Iron Bowl at Alabama, said it’s a similar mentality: “It’s a got-to-have-it type game, and we definitely got to have this one.”

Despite games against the Eagles and New York Giants on the horizon, McCarthy and Rivera are trying to keep the focus on Sunday. The tightness of the standings gets the point across.

“Every game from this point on is critical,” Cowboys defensive end Demarcus Lawrence said. “We’re playing for playoffs. That’s the bottom line. We got high dreams, high goals, and we can’t let nobody step in our way and take those away from us.”

Washington is trying to go from 2-6 to NFC East champs for a second season in a row. While Cowboys linebacker Micah Parsons, who opted out of 2020, said of Washington’s domination of Dallas last year that “COVID year don’t count,” young players on the other side are benefitting from their last late-season run.

“We’ve been in this situation before and dug ourselves out before,” pass-rusher James Smith-Williams said. “We had faith that we could do it again.”

The starting defensive line the Cowboys expected to have to open the season should play together for the first time against Washington. Defensive tackle Neville Gallimore, who dislocated his left elbow in a preseason game, is set for his season debut. End Randy Gregory returns after missing four games with a calf strain. Lawrence returned last week after being out since breaking a foot in practice the week after the opener.

“It’s like having clear skies on a beautiful day,” Lawrence said. “You know you’ve got something to look forward to. We’ve got high hopes of a playoff run and making it to that Super Bowl. So it’s all about really honing in on our details, taking it one game at a time and eventually we’ll get to where we need to go.”

Washington’s success running the ball, controlling the clock and giving the defense a breather is thanks in large part to second-year back Antonio Gibson. He has been steady and dependable since Rivera benched him for fumbling against Carolina three weeks ago, and Gibson has rushed 52 times for 199 yards in the past two games.

“He’s geared himself up for each week, and he’s really kind of grasped that role,” Rivera said. “He’s done a great job accepting the challenge. We try to be very smart with him, especially these next couple of days as we start ramping up for Sunday. He’s the kind of guy that I think he gets stronger as he gets more opportunities.”

Elliott said an MRI showed his ailing right knee was improving. He also said the rest from the mini-break helped, and he expects the knee to be close to healed in about a month, which he hopes is just in time for the playoffs.

The two-time rushing champion said he can’t make the injury worse by playing. He also said he won’t need surgery after the season.

There’s more intrigue at running back for Dallas after backup Tony Pollard injured a foot on his 58-yard touchdown run in last week’s 27-17 victory over New Orleans. Pollard says he’s a game-time decision.

Washington won’t have Montez Sweat back from a broken jaw after the pass rusher tested positive for the coronavirus and went on the COVID-19/reserve list. Smith-Williams, Casey Toohill and rookie Shaka Toney had already stepped up with Sweat out and reigning Defensive Rookie of the Year Chase Young out for the season, so it’s nothing new.