Washington will have a starting quarterback next season. Just don't expect Ron Rivera to tip his hand on who that will be.
Listen now to WTOP News WTOP.com | Alexa | Google Home | WTOP App | 103.5 FM

Washington will have a starting quarterback next season. Just don’t expect Ron Rivera to tip his hand on who that will be.

Trade for Deshaun Watson or another established QB under contract? Sign a free agent such as Cam Newton? Roll with Alex Smith and Kyle Allen? All are possibilities now that Matthew Stafford is off the market.

“We’re exploring all of our options,” Rivera said. “Nothing is off the table.”

Rivera and his two new executives — incoming general manager Martin Mayhew and executive vice president of football and personnel Marty Hurney — spoke highly of Smith’s comeback from a broken leg and how he was 5-1 as the starter last season.

In an hourlong video news conference Wednesday, they were tight-lipped about the organization’s direction at the position and Rivera didn’t commit to Smith being on the roster next season at age 37.

“The biggest thing we have to do is we have to continue to go through our process,” Rivera said when asked about Smith’s future. “We’ve got to sit down and talk about it.”

Washington reportedly talked to the Detroit Lions about Stafford, whom Mayhew drafted first overall in 2009 as their GM, before he was traded to the Los Angeles Rams. Rivera said he’s “not going to get into details about the things we’re doing and how we’re doing them.”

He was similarly unwilling to reveal which players, if any, might be untouchable in trade talks. With plenty of teams expected to be in on the bidding for Watson, there has been speculation about the Houston Texans asking about standout edge rusher Chase Young, the No. 2 pick in the 2020 draft.

“I’m not going to get into that,” Rivera said. “I don’t think that’s fair. We’ve got a lot of really good football players that we really, truly do like on our football team.”

The defense led by Young ranked second in the NFL. Washington went 7-9 and won the NFC East in Rivera’s first season before losing to Tampa Bay in the wild-card round. With some building blocks in place, now is the time to complete the puzzle with a QB, but at what cost?

Despite being out of football until he was signed to the practice squad in December, 27-year-old journeyman Taylor Heinicke started the playoff game against the Buccaneers and impressed, and he could be in the mix next season. But finding a franchise quarterback is a front-burner issue, especially after cutting ties with 2019 first-round pick Dwayne Haskins.

“It’s one of the key positions on the football field,” Mayhew said. “It’s something that we’ve been giving a lot of thought to. We’re working through that process right now.”

Washington has the 19th pick in the draft, which is likely too late for any of the top quarterbacks available.

“A lot of times it’s all about timing in the draft, what position you’re in and who’s out there,” Hurney said. “It comes down to currency. It does come down to where you are. Can you protect the quarterback? Do you have weapons for him? So, there’s so much that is included in that process.”

One question on the protection department is the status of pending free agent guard Brandon Scherff, who earned All-Pro honors for the first time. Rivera said Scherff is “one of the players” he and the front office are discussing. 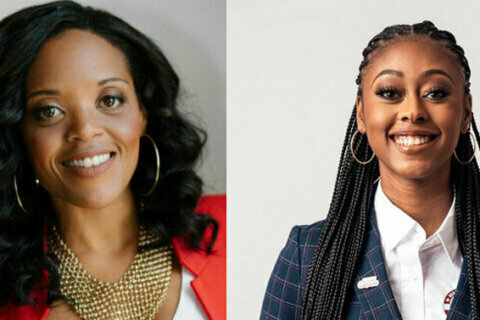