The DeMatha football team has invested in some non-traditional workouts which have paid dividends the past couple seasons.
Listen now to WTOP News WTOP.com | Alexa | Google Home | WTOP App | 103.5 FM
(1/4) 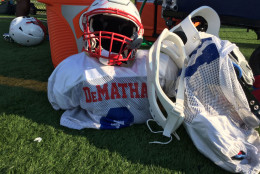 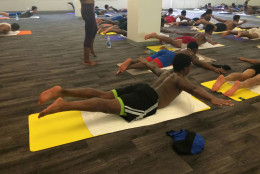 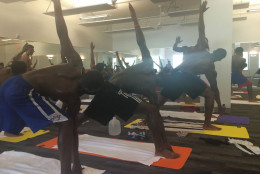 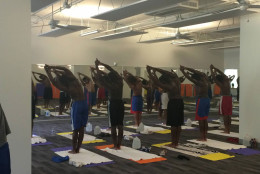 RIVERDALE PARK, Md. — It’s a hot summer morning, the air already dripping with dread for the triple-digit heat index to come. You’d think it would be the perfect day for an indoor workout, and normally you’d be right.

But this workout studio comes with a twist — half the participants are bulky teenagers, and the thermostat is cranked up to 104 degrees.

Many people have heard of Bikram or “hot yoga,” but at Bikram Hot Yoga Riverdale Park, the same principle is applied to Pilates and other classes as well. That’s what a group of about 20, including roughly 10 DeMatha Catholic High School football players, are here to do — one hour of high-intensity exercises in the stifling heat.

It’s the second year that the team has been using the non-conventional training method, adding Pilates to the repertoire after starting with Bikram last year. The basketball team at DeMatha was actually the first to try yoga, and head football coach Elijah Brooks thought there might be some value in it for his team, as well. So, he tried it first.

“I wanted to try it out before I got my team involved,” he said. “Without a doubt, it was one of the most difficult things I’ve ever participated in.”

It can be particularly difficult for football players, who tend to have compact bodies, and who often focus on building strength rather than flexibility. That’s where Kendra Blackett-Dibinga’s programs come in.

“When we started talking to Coach Brooks about the Pilates, it was because a lot of his bigger players were big, and they weren’t as effective or agile on the field,” she explained after the session. “If we work with them and we can slim them down, even if they keep their size, in terms of bulk, they’ll keep their trim and their tone.”

The routines also offer the chance to strengthen an often overlooked part of the body in American sports, the back.

“A lot of times, football players, you tend to focus a lot on the weight room, but you take out the flexibility, the soft tissue development that goes on in yoga,” said Brooks. “The core gets worked in almost every pose in yoga, and we’ve seen it pay huge dividends with our players.”

Then, of course, there’s the matter of the heat. For 10 minutes, your body holds it off. For the next 20, it fights it. Finally, it succumbs to the reality, whether it’s for the 60-minute Pilates class or the 90-minute Bikram class.

“Mentally, it is very tough to push through 90 minutes in 104-degree temperature,” said Brooks. “It is extremely challenging. So it is all encompassing, it challenges your mind and your body.”

So how do the two workouts compare for the players?

“They’re both difficult, but I’d say yoga is more difficult, because it’s longer and you’re staying in the poses for longer,” said senior defensive tackle Terrill Jones. “I think it is just a test of our will, our mental strength.”

Sophomore tight end/defensive end Alec Solano transferred to DeMatha this year. He hadn’t seen anything like the Bikram and Pilates conditioning before.

“When I came to DeMatha, I was surprised with everything that we’re doing,” he said, but is thankful for the experience and is looking forward to continuing it during the season.

“I hope so. It really helps us loosen up, be flexible,” Solano said.

Jones says he definitely noticed a difference in DeMatha’s opener last season, when they stunned the second-ranked team in the nation, Miami’s Central High School, 38-17 on national television.

“It helped our bodies continue on through the game,” said Jones. “We really felt it.”

“Absolutely,” he said. “We want to always give our kids an advantage, and being able to go out and play an August day or night and know that we’ve been in these temperatures, equivalent to that of hot yoga, gives our guys, we feel, a mental edge.”

DeMatha opens its season Friday in Chesapeake, Virginia, against Oscar Smith, one of the best teams in the state. The predicted high temperature that day is a balmy 94 degrees. But that’s a full 10 degrees lower than the studio in Riverdale Park, where the team has been preparing their bodies and minds, 90 minutes at a time, for the new season.