The gubernatorial election in Virginia promises to be a nail-biter this fall, according to a new poll from Virginia Commonwealth…
Listen now to WTOP News WTOP.com | Alexa | Google Home | WTOP App | 103.5 FM

The gubernatorial election in Virginia promises to be a nail-biter this fall, according to a new poll from Virginia Commonwealth University.

According to the statewide poll, former Gov. Terry McAuliffe (D) only has a 3% edge over Glenn Youngkin (R), but more than one-fifth of voters remain undecided.

Just over 10 weeks away from Election Day, 23% of Virginia voters say they are either undecided or unwilling to choose either of the candidates for governor. That’s a big deal considering the gap in voter support between McAuliffe (40%) and Youngkin (37%) is smaller than the poll’s 5.2% margin of error.

Polling was conducted by the L. Douglas Wilder School of Government and Public Affairs via landline and mobile telephone interviews from Aug. 4-15. Polling covered a representative sample of 823 adults living in Virginia.

“The gubernatorial candidates are in a virtual dead heat,” said former Gov. L. Douglas Wilder, noting that debates for both the governor and lieutenant governor races had yet to occur. “That could change once positions are taken on the issues.”

Democrats lead by wider margins in the races for lieutenant governor and attorney general, but those races also have higher proportions of undecided or uninterested voters.

Lieutenant gubernatorial candidate Hala Ayala leads Republican Winsome Sears 39% to 31%, but 29% of voters in that race are undecided or do not wish to vote for either candidate.

Democrat Mark Herring has an 11% margin over attorney general hopeful Jason Miyares (41% versus 30%) and another 29% of voters are undecided or uninterested.

“How the pandemic affects turnout and enthusiasm energizes voters should be of utmost concern,” said former Gov. Wilder.

The poll also surveyed Virginians’ approval for current Democratic Gov. Ralph Northam, with 51% saying they approve while 42% say they disapprove. White, non-Hispanic respondents were less likely to approve of Northam’s performance than Minority and/or Hispanic respondents (44% to 65%). 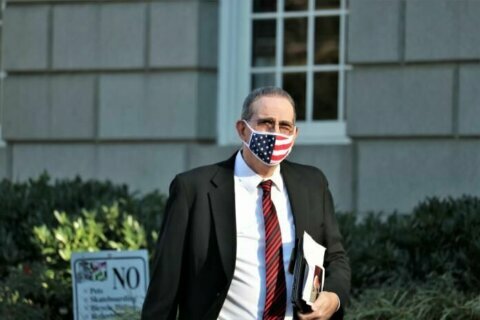