Back to school, with panic buttons: The post-Uvalde scramble

Schools are installing panic buttons to summon help during a shooting, as they scramble to reassure worried parents after this spring's massacre in Uvalde, Texas, and ahead of back-to-school.
Listen now to WTOP News WTOP.com | Alexa | Google Home | WTOP App | 103.5 FM
(1/4) 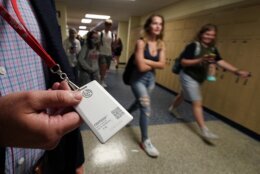 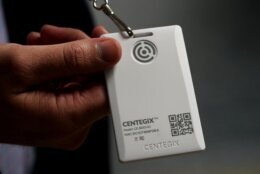 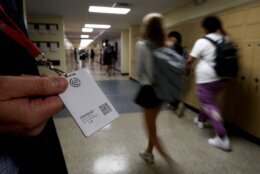 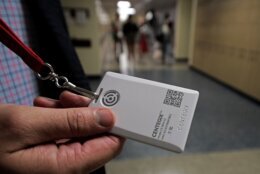 MISSION, Kan. (AP) — Melissa Lee comforted her son and daughter after a student opened fire in their suburban Kansas City high school, wounding an administrator and a police officer stationed there.

Then weeks later, she wept for the parents in Uvalde, Texas, who were forced to bury their children after the massacre there in May. She said she was “absolutely” reassured when she learned her district had since purchased one of the panic-alert systems gaining traction nationwide amid a surge in school violence. The technology, featuring wearable panic buttons or mobile phone apps, enables teachers to notify each other and police in the event of an emergency.

“Time is of the essence,” said Lee, whose son helped barricade a classroom door and watched police enter his school with guns drawn. “They can hit a button and, OK, we know something’s wrong, you know, really wrong.”

Multiple states now mandate or encourage the buttons, and a growing number of districts are shelling out tens of thousands of dollars per school for them — part of a widespread scramble to beef up school security and prevent the next tragedy. The spending spree includes metal detectors, security cameras, vehicle barriers, alarm systems, clear backpacks, bullet-resistant glass and door-locking systems.

Critics say school officials are scrambling to show action — any action — to worried parents ahead of the new school year, but in their haste may be emphasizing the wrong things. It’s “security theater,” said Ken Trump, president of the National School Safety and Security Services. Instead, he said, schools should focus on making sure teachers are implementing basic safety protocols such as ensuring doors aren’t propped open.

The attack in Uvalde illustrated the shortcomings of panic-alert systems. Robb Elementary School had implemented an alert app, and when an attacker approached the school, a school employee sent a lockdown alert. But not all teachers received it because of poor Wi-Fi or phones that were turned off or in a drawer, according to an investigation by the Texas Legislature. And those who did may not have taken it seriously, the Legislature’s report said: The school sent out frequent alerts related to nearby Border Patrol car chases.

“People want visible, tangible things,” Trump said. “It’s a lot harder to point to the value of training your staff. Those are intangibles, … but they’re most effective.”

In suburban Kansas City, the decision to spend $2.1 million over five years for a system called CrisisAlert “isn’t a knee-jerk reaction,” said Brent Kiger, Olathe Public Schools’ director of safety services. He said he had been eying the system even before gunfire erupted in an Olathe high school in March as staff confronted an 18-year-old over rumors that he had a gun in his backpack.

The Olathe district considered whether panic buttons would have made a difference that day. “It would have helped us,” Kiger said. “There’s just no question about that.”

The system, a different one than what Uvalde relied on, allows staff to trigger a lockdown announced with flashing strobe lights, a takeover of staff computers and a prerecorded intercom announcement. Teachers can set off the alarms by pushing a button on a wearable badge at least eight times. Staff also can summon help for a hallway fight or a medical emergency if they push the button three times.

Arkansas was an early adopter of panic buttons, announcing in 2015 that more than 1,000 schools would be equipped with a smartphone app that connects users quickly with 911. At the time, education officials said the plan was the most comprehensive in the nation.

But the idea really gained steam after the 2018 mass shooting at Marjory Stoneman Douglas High School in Parkland, Florida.

Lori Alhadeff, whose 14-year-old daughter, Alyssa, was among the 17 killed, founded the group Make Our Schools Safe and began advocating for panic buttons. She had texted her daughter as shots rang out that help was on the way.

“But in reality, there was no panic button. There was no immediate way to contact law enforcement or emergency services to get on site as soon as possible,” said Lori Kitaygorodsky, the group’s spokeswoman. “Time equals life.”

Over the years, legislation also has been introduced in Nebraska, Texas, Arizona and Virginia, according to Make Our Schools Safe.

Las Vegas schools also decided to add panic buttons this year to deal with a wave of violence. The district recorded 2,377 assaults and batteries from August 2021 through the end of May, including an after-school attack that left a teacher injured and unconscious in her classroom. Other districts adding panic buttons for back-to-school include Madison County Schools in North Carolina, which also are putting AR-15 rifles in every school, and the Houston County School District in Georgia.

Walter Stephens, chief of school operations in the 30,000-student Houston County district, said the district piloted the panic-button technology last year in three schools before signing a $1.7 million, five-year contract to make it available in all buildings.

Like most schools, the district reassessed its safety protocols after the tragedy in Uvalde. But the Texas shooting didn’t provide the impetus to add the panic buttons, Stephens insisted. If students don’t feel safe, he said, “that translates to them not performing well in our schools.”

Whether the buttons deliver as promised is something experts are monitoring. In places like Florida, a panic button app has proven unpopular with teachers. And what happens, asked Mo Canady, executive director of the National Association of School Resource Officers, in the case of a false alarm, or a student using a panic button to cause mayhem?

“In throwing so much technology at the problem … we may have unintentionally created a false sense of security,” Canady said.

Kansas state Sen. Cindy Holscher represents an area that includes part of the Olathe district, and her 15-year-old son knew the Olathe East shooter. While Holscher, a Democrat, supports the addition of panic buttons in the district, she said schools alone can’t fix the country’s mass shooting problem.

“If we make it way too easy for people to get their hands on guns, it’s still a problem,” said Holscher, who has championed a red-flag law and another measure that would have mandated safe firearm storage. She said neither measure even got a hearing in the GOP-dominated Legislature.

“We have got to get to the heart of the issue at some point.”