On a single Kentucky street, the tornado killed 7 children

When a tornado touched down in Bowling Green, Kentucky, in the middle of the night, its violence was centered on this friendly subdivision, where everyone waved at one another and giggling children spent afternoons tooling around on bicycles on the sidewalks. Fourteen people died in a few blocks, 11 of them on a single street, Moss Creek Avenue.
Listen now to WTOP News WTOP.com | Alexa | Google Home | WTOP App | 103.5 FM
(1/13) 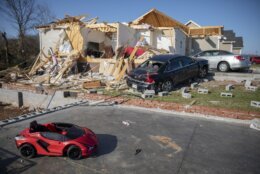 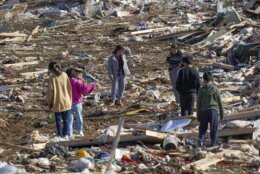 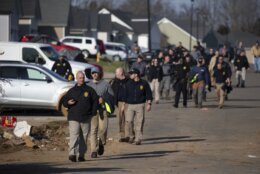 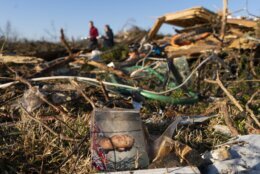 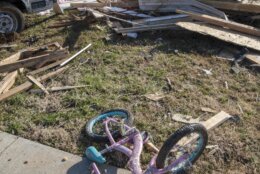 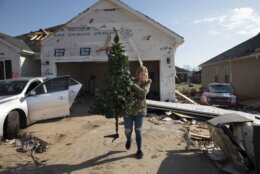 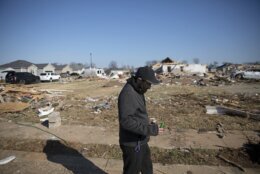 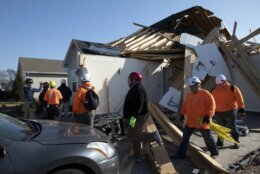 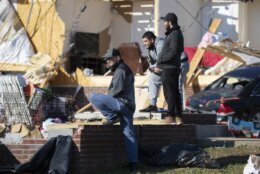 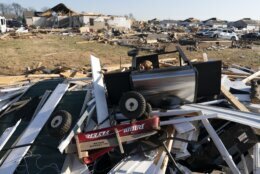 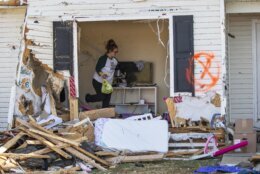 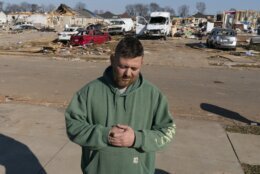 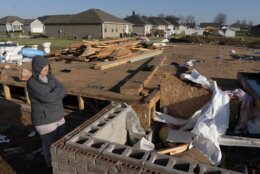 BOWLING GREEN, Ky. (AP) — The little red wagon was strewn upside down on a heap of rubble — a pile of boards and bricks, a mangled blue bicycle, a baby doll.

Behind it, there was little more than a hole in the ground where a house had stood. Across the street, the tidy homes on this cul-de-sac were reduced to mounds of lumber. Clothes hung from the branches of snapped trees. The walls of one house were gone, and the only thing left standing inside was a white Christmas tree.

When a tornado touched down in Bowling Green, Kentucky, in the middle of the night, its violence was centered on this friendly subdivision, where everyone waved at one another and giggling children spent afternoons tooling around on bicycles on the sidewalks. Fourteen people died in a few blocks, 11 of them on a single street, Moss Creek Avenue. Entire families were lost, among them seven children, two of them infants. Neighbors who survived are so stricken with grief they struggle to speak of it. All around them, amid the ruins, is evidence of the kids they used to watch climb off the school bus.

Melinda Allen-Ray has barely slept since early Saturday, when tornado alerts started screaming and she carried her grandchildren into the bathroom as winds whipped her house apart. After just minutes of destruction, there was silence. She went outside and heard her neighbors’ screams.

“I heard them — it traumatized me. I think about that each night when I go to sleep, when I do sleep,” she said. In her dreams she hears the screaming and wakes up. She wept all weekend.

“I just think about all those babies,” she said.

Hers is a diverse community of families from around the world — Bosnia, Myanmar, Nigeria — many of whom fled from violence. For some, this fresh destruction triggers thoughts of the dark days they fled in their homelands, where they hid from bombs and lost whole families.

“We come from war; this reminds us, it touches the memory of that, where we’ve been and how we came here,” said Ganimete Ademi, a 46-year-old grandmother who fled Kosovo in 1999 during the war, in which she lost her uncle and a nephew. Now she looks around her own neighborhood.

One of the families that lost many members was from Bosnia. Two brothers lived in homes next door to each other with their families, Ademi said. They were happy and gregarious, holding summertime parties in the yard. From the two brothers’ households, one woman died, along with two children and two infants, police said. Their surviving relatives said it’s too difficult to speak of it.

Around the corner, a 77-year-old grandmother was killed. Two others from the neighborhood died of their injuries at the hospital.

“That’s hard to think about — you go to bed, and your entire family is gone the next day,” said Ronnie Ward, with the Bowling Green Police Department. They usually tell people to get in a bathtub and cover up with a mattress, he said, but that probably would’ve made little difference here: Some homes were destroyed so completely the tornado ripped all the way through the floor, exposing the earth below.

Now, they comb through what remains, turning over every strip of dry wall and each twisted car to make sure there aren’t more victims underneath. It can be horrific work, Ward said, but they try to steady themselves enough because they know it must be done.

“So you go about that task of trying to get this work done, and then you come across a wagon,” he said, standing near the Radio Flyer bent and broken on a pile. “And you think, that’s associated with a child somewhere. And did that child live? Those thoughts, they overtake you, they overwhelm you.”

What these children left consumes them. There’s a Barbie doll missing a leg. A reindeer stuffed animal. A scooter, a toy horse, a hula hoop. There’s a pink Disney princess backpack. A car from “Paw Patrol,” and bedding printed with the faces of its goofy animal first responders.

The people who’ve had to see it are reckoning with how close they and their own children came. As the tornado tore through the subdivision, it decimated some houses and damaged others, yet left some just next door unscathed.

“It’s almost hard to look at, because how did it miss that house but it got this house?” Ward said.

A tree shot through the neighborhood like a missile and landed in Ademi’s backyard, about a dozen feet from where she’d cowered with her husband. Her four children and two grandchildren live nearby. “This tree could have come in my house, and we’d all be gone too,” she said.

The tornado turned just as it got to Benedict Awm’s house. Inside, he, his wife, their 2-year-old son and infant held one another under a blanket to protect their eyes and bodies from the broken glass shooting through shattered windows. His wife shook and asked if they would die. He said he didn’t know.

“It’s terrible, you can’t imagine, I thought we were dead,” he said. Had the tornado kept on its course, they would be, he thinks. But instead it turned slightly. Thunderous winds turned to silence, and their house still stood. A miracle, thinks Awm, who moved here from war-torn Burma.

Around the corner, someone spray-painted on their front door the words “By God’s grace we survived,” and hung an American flag from the wreckage of their rafters.

For days now, volunteers have arrived from all over with trucks and tools, and there’s comfort in that.

“Sometimes it makes me want to cry, to see how people are willing to help me,” Awm said.

Ben Cerimovic pulled his truck and trailer in every day over the weekend. He’s an immigrant from Bosnia, and he knows the family that died here.

“The feelings I’m having right now I really can’t explain,” he said. There’s a close-knit, thriving Bosnian community in Bowling Green, which has a robust refugee resettlement program to bring migrants to Western Kentucky. Most of them came here from war so their children would have a better life, he said. Now this subdivision looks like a war zone, scattered with things their children loved.

Cerimovic volunteered Saturday and Sunday, but he had to take Monday off to gather his emotions.

“Every time I see this, and I hear about those kids, I think about mine,” he said. “What if they were my kids?”