One local organization is changing the way people buy and use energy ... one neighborhood at a time.
Listen now to WTOP News WTOP.com | Alexa | Google Home | WTOP App | 103.5 FM

WASHINGTON – For many families, buying in bulk is generally reserved for toilet paper and cereal, but a D.C.-based community organization is hoping to expand that list to solar power.

In 2006, Anya Schoolman decided to invest in solar panels for her Mount Pleasant home in Northwest, D.C. But what she hoped would be a rewarding and impactful endeavor, turned out to be complicated and confusing.

After all, Schoolman explains solar panels were relatively new to the consumer market eight years ago. There were few contractors, few incentives and even fewer policies in place.

That’s when Schoolman decided to get her whole neighborhood involved. She knew there were others interested in solar panels, and so in 2007, she formed a Mount Pleasant solar co-op.

“It really made a difference doing it as a group. We helped each other all along the way, you know, choosing the installer, the installation … Everything was new back then,” says Schoolman, who adds that working with the community made things easier when it came to navigating policies and permits.

“As a group, we just had much more bargaining power.”

But Schoolman’s neighborhood initiative did more than lower costs for those buying into solar — it created a wave of interest in the renewable energy throughout the Washington region.

By 2009, Schoolman and her neighborhood’s co-op installed solar panels on 45 houses in Mount Pleasant. The pro-solar residents didn’t stop there.

Schoolman, who has been working in sustainable development for more than 25 years, now sits as the executive director of D.C. Solar United Neighborhoods (DC SUN), an umbrella organization of 11 D.C. neighborhood co-ops in all eight wards of the District. DC SUN also coordinates solar programs in Maryland, Virginia and West Virginia.

The organization, which is run entirely of volunteers and community activists, works to make rooftop solar power accessible and affordable to communities by providing them with information needed to navigate the solar process.

“Pretty much every week, somebody from a neighborhood is coming to us and saying, ‘Hey, I’d like to organize [a solar buying group] in my neighborhood,'” Schoolman says.

Brian Keane, president of SmartPower, a nonprofit marketing and outreach organization on clean energy and energy efficiency, says the bulk community approach to purchasing solar power is not unusual. It’s the current trend.

According to Keane, one of the biggest barriers consumers have in buying solar is that they don’t know where to start, or even how to buy it.

“You don’t walk into CVS and buy solar. There isn’t a solar store,” Keane says.

Instead, he says Americans are more likely to buy solar if their friends or neighbors have solar, since it’s much easier to learn the process from someone who has already been through the ropes.

Keane compares solar panels to the Prius, a hybrid car first released worldwide by Toyota in 2000.

“And now everybody’s got a Prius. It’s just kind of part of the fabric of the neighborhood,” he says.

“The general assumption is that solar power is better for the environment, and it really is. The way we power our lives today — coal, oil, nuclear power, natural gas — all have significant environmental footprints,” Keane says.

While Keane acknowledges solar energy and wind power also come with environmental footprints, he says these sources of renewable energy have much less of an impact on the environment.

“Literally, we, as consumers, are using energy 24 hours a day, seven days a week, 365 days a year. Our houses are always on, even when we’re asleep,” Keane says.

“When you start to create your own energy, when you take ownership of your energy, you start to use it better.”

According to the Environmental Protection Agency, solar energy comes from using the sun as fuel to create electricity.

“You basically don’t notice it. You’re connected to the grid,” Schoolman says.

She explains that when the panels produce energy, the house uses electricity from the panels first. If the house produces an excess, the energy runs out through the meter onto the grid, turning the meter backwards.

At the end of the month, residents with solar panels pay the total amount used, minus the amount produced.

“Typically, people will produce about one-third to one-half of their electricity with their solar. And the rest comes off the grid,” Schoolman says. “If a light bulb is burning, you don’t know if it’s from your panels or from the grid. You can’t tell the difference at all. It’s all electricity.”

Cutting the Costs with Solar Energy

What was once a home improvement for the wealthy or uber-environmentally conscious, is now much more accessible to a variety of homeowners.

The costs associated with solar panels are not through the roof, so to speak.

According to the Solar Energy Industries Association, the average price of a solar panel has declined by 60 percent since the beginning of 2011. And the Center for American Progress reports solar panel installations overwhelmingly occur in middle-class neighborhoods, with median incomes ranging from $40,000 to $90,000.

Since 2000, more than 1,460 megawatts of residential solar installations have been installed across the country — 80 percent were added in the past four years, the Center for American Progress reports.

“We’re really starting to see [solar panels] take off because we’ve hit this price point where, certainly if you’re a homeowner, you’d be kind of silly not to because the lifetime savings is so huge,” DC SUN’s Anya Schoolman says.

She says one of the best parts about buying solar power in bulk with other community members is the discounts involved. Schoolman estimates buying in a group saves residents close to 30 percent from the contractor, alone.

On top of that, there are federal government tax credits and city government incentives.

When it all comes down to it, Schoolman estimates that it costs between $4,000 and $6,000 to install a full solar panel system on one’s house in the D.C. area.

As more and more homeowners reap the benefits of solar panels, those who don’t own homes are clamoring for a slice of the pie. And pretty soon, renters and apartment dwellers will be able to buy into solar energy.

In October 2013, the D.C. Council approved the Community Renewables Energy Act — a program that will allow those without solar panels on their roofs to buy into a solar program. People in the program harness energy from panels placed elsewhere, such as on a government building, a school roof or a parking lot.

“The solar panels aren’t on your house,” Keane says. “They’re down the street, they’re somewhere in your community. And everybody helps pay into it and everybody can feed off of it at the same time.”

The District program, which Schoolman says was DC SUN’s top legislative priority for the past 2 1/2 years, is expected to go into effect later this year.

“You could move around the city, just as long as you stay in D.C. and still have the same solar … It makes it very, very flexible,” she says.

As DC SUN’s services have grown with the increased demand for solar energy, Schoolman says the organization recently started charging $500 to the solar installers upon a community’s completed contract. She says since this fee has been enacted, DC SUN has not seen a rise in prices for homeowners.

“Our approach is really more of a respond to a request than go out and sell. If people want it, we’re there to help them get it,” she says. 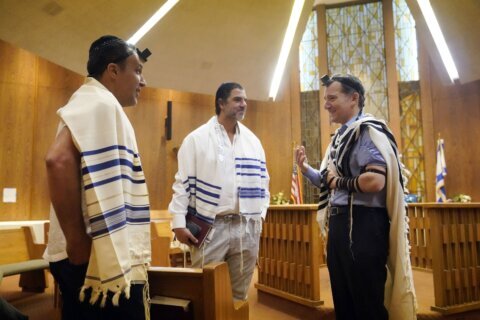