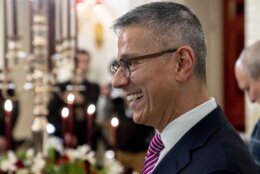 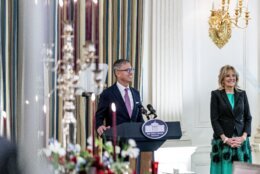 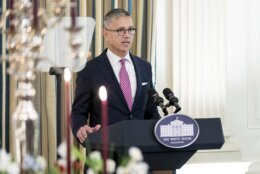 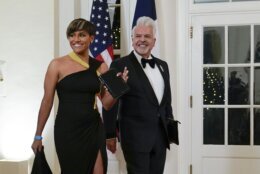 WASHINGTON (AP) — Cookies forgotten in purses until they crumble. Complaints about not being invited. Boycotts over political disagreements with President Joe Biden.

After a couple of party-free years because of the coronavirus pandemic, White House holiday parties are back — and the “people’s house” is once again welcoming the people. Lots of people. An estimated 50,000 visitors between Thanksgiving and Christmas.

And helping make it all happen is White House social secretary Carlos Elizondo.

“Everybody’s ready to have a party,” said Rickie Niceta, who had Elizondo’s job in the Trump administration.

It’s been a whirlwind month for Elizondo, who oversaw holiday decorating by 150 volunteers after Thanksgiving followed by a visit by France’s president that included a state dinner for more than 330 guests. There also was a White House reception for the Kennedy Center honorees and a three-day summit with nearly 50 African leaders — including a group dinner in the East Room and a performance by Gladys Knight.

Elizondo also lent his expertise to preparations for the 250-guest South Lawn wedding of Biden’s granddaughter Naomi in November, and he is working his way through more than 20 holiday parties and receptions, sometimes two per day, ending later this week.

And with the end almost in sight, a surprise White House visit Wednesday by Ukrainian President Volodymyr Zelenskyy was added to the mix, requiring even further juggling by Elizondo.

So how is he managing? “Lots of caffeine,” said Elizondo, the first Latino to become White House social secretary. He began working for Biden and his wife back when Biden was Barack Obama’s vice president.

“For over a decade the President and I have relied on Carlos for his creativity, heart, and dedication to bring our traditions and warm welcome to the American people,” first lady Jill Biden said in a written statement to The Associated Press. “Now at the White House, Carlos is helping us celebrate the richness of our country’s culture and diversity, and together, we are opening the doors of ‘the People’s House’ wider and wider.”

Handshaking wasn’t in last year’s holiday script when COVID-19 shadowed Biden’s first year as president. Limited numbers of guests were invited to open houses to experience the White House decked out for the season. Food was not served, and the Bidens did not participate.

But this year brought the return of parties, complete with gripping and grinning, buffet tables with shrimp, lamb chops and other tasty morsels and a quick greeting with the president and the first lady in a photo line. Guests were asked to disclose their COVID-19 vaccination status and test for the virus before attending.

White House merry-making would seem incomplete without some grumbling. And a boycott.

Multiple journalists grumbled openly about not being invited. “PBS NewsHour” anchor Judy Woodruff shared a photo of the crumbs from a cookie she tried to save for later.

“This is what happens when you steal a Christmas cookie at the White House holiday party, throw it into your purse but forget about it until you get home,” Woodruff tweeted.

Elizondo, a bespectacled 60-year-old, began working for the Bidens in January 2009, after Joe Biden became vice president, and he held the job until Biden’s term ended in 2017.

Cathy Russell, Jill Biden’s former chief of staff, recalled how she and the now-first lady interviewed Elizondo at the Bidens’ home in Delaware. He was working at Georgetown University at the time, planning events for the school’s president.

Elizondo showed them a portfolio of the “beautiful events he did at Georgetown.” Jill Biden, a practical joker, thought he was “super serious” but liked him and offered him the job. They clicked.

“He and the first lady are just really in sync in wanting to make sure that people felt really comfortable,” Russell said. “They just hit it off right from the beginning.”

After Joe Biden won the 2020 presidential election, the Bidens again turned to Elizondo, who is one of the most experienced social secretaries in recent White House history. Elizondo worked in the State Department protocol office for most of the Clinton administration and later at Disney World.

Elizondo plans a range of social engagements at the White House, from events as large as the 30,000-person annual Easter Egg Roll or Fourth of July celebration to as small as an Oval Office lunch for just the president and vice president.

Katherine Vargas, who worked in the Obama White House, and Henry R. Munoz III, a longtime friend of Elizondo, said the family focus of Elizondo’s Mexican American upbringing likely endeared him to the Bidens, who are a close-knit family themselves.

She and others say Elizondo is warm and funny, even in a high-stress job that demands that he always keep a few balls in the air.

Said Vargas: “He juggled with grace.”

Associates say Elizondo’s long ties with the Bidens are key.

When he assisted the first lady at a press preview of the administration’s first state dinner, for French President Emmanuel Macron on Dec. 1, Elizondo said that what matters most to the Bidens “is making people feel comfortable.”

“And I’m honored to have this opportunity to help them bring that hospitality to the world stage,” he said.

Munoz, a businessman and philanthropist, was a guest at the state dinner for the first time and said the event, which had so many guests that a temporary pavilion was erected on the South Grounds to accommodate them, “felt like the Bidens.”

He credited Elizondo for being “able to interpret working with them.”

Munoz attended with a friend, actor Ariana DeBose, and was seated at the head table with the president and the first lady. Munoz said he sat beside Bernard Arnault, the CEO of luxury goods maker LVMH. Dinner conversation with Arnault, his wife, DeBose and others around them jumped from architecture and design to fashion and music.

“How did he know that at my end of the table that I would want to talk about architecture and design with Bernard Arnault?” he said of Elizondo. “That’s a talent for understanding how people should be mixed together.”

“It was an important table. I don’t even know what I was doing at it,” Munoz joked.