As a child, Wendy Schmidt didn’t think about how the ocean intersected with human life. It was a nice place…
Listen now to WTOP News WTOP.com | Alexa | Google Home | WTOP App | 103.5 FM

As a child, Wendy Schmidt didn’t think about how the ocean intersected with human life. It was a nice place to go swimming, but it was mostly a murky, unknowable realm that didn’t have much to do with her day-to-day life.

That outlook changed 15 years ago when she started sailing and learned to scuba dive. Now the health of the world’s oceans looms large in Schmidt’s thinking about the planet’s future and in her giving.

“People commonly encounter the ocean from the shore, the deck of a ferry boat, or from an airplane. It’s historically been a place of mythology, sea creatures, and scary stuff. In some ways, you could say it’s your worst nightmare, and yet, ironically, it’s also the source of all life. It’s 71% of the earth’s surface,” Schmidt says. “Suddenly you see that’s a different planet than you thought you lived in. It’s mostly ocean and the life in the ocean, and we’re just a small player here with a really outsized footprint.”

Schmidt leads a collection of philanthropies through which she and her husband, former Google CEO Eric Schmidt, work to help protect the planet. They give to support clean energy, marine science and ocean conservation, and efforts to address climate change, plastic pollution, and food insecurity. The couple have also built programs that support and connect young leaders, scientists, and others working to solve an array of global problems.

The Schmidts have poured nearly $2.2 billion into their philanthropies since 2019 and during that time have pledged and given away more than $1.4 billion.

Since 2009, the couple have given more than $360 million to the Schmidt Ocean Institute, which operates a research ship that it makes available free to scientists worldwide. It also helped develop SuBastian, an underwater robotic vehicle scientists use to conduct deep-sea research experiments.

While they are not the largest contributors to ocean conservation and marine science, their insistence that the institute share its findings with scientists and the public is important, says Ashley Enrici, an assistant professor of philanthropic studies at Indiana University’s Lilly Family School of Philanthropy, who studies philanthropy’s role in marine conservation.

“That knowledge can be used for policy decisions by the government and to support public awareness and education campaigns,” Enrici says. “It has the potential to fill lots of different gaps.”

Environmentalism and a global outlook weren’t a feature of Wendy Schmidt’s formative years. She grew up in a big Irish Catholic family in Short Hills, New Jersey, the second oldest of five children and the only girl. Curiosity and adventure were not encouraged, but she was endlessly inquisitive.

“I was the little one who was always annoying everybody by asking, ‘How come? How come?’ about everything,” Schmidt recalls.

After earning a dual degree in sociology and anthropology from Smith College in 1977, Schmidt attended the University of California at Berkeley, where she earned a master’s degree in journalism and met her future husband, who was working on a Ph.D. in computer science.

She says her worldview expanded at Berkeley, where she was exposed to people from other cultures, to new information, and even to new cuisines.

“Suddenly everything just opened up. Chinese food wasn’t Chun King from a can anymore,” she says. “It was real Chinese food.”

The couple married in 1980. After she graduated, she took a marketing job at Plexus Computers and was recruited by Sun Microsystems, a burgeoning Silicon Valley computer company, in 1982. (Eric joined Sun in 1983 and later became its chief technology officer.) She left Sun in 1985 when the company went public.

Schmidt soon learned that to solve global warming, you have to examine agricultural practices, land use, and human rights, so she focused on connecting nonprofit leaders working in those areas, especially those from overlooked backgrounds and Indigenous groups.

“I knew nothing at all about Indigenous communities in the United States,” Schmidt says. “I’m absolutely amazed that I could reach this stage in my life and not have realized all along that every inch of land that we occupy here in the United States was occupied by someone else who doesn’t have it now.”

A-dae Romero-Briones, director of programs in Native Agriculture and Food Systems at First Nations Development Institute, and a lawyer with expertise in food and agriculture law, first met Schmidt in January 2018 when she spoke at the Schmidt Family Foundation’s staff book club.

Romero-Briones says she was struck by Schmidt’s curiosity. Schmidt asked a lot of questions about Indigenous communities’ needs and she invited Romero-Briones to spend several days with 11th Hour Project staff so they could learn more. Romero-Briones, in turn, suggested that they visit tribal communities in central California so they could hear from Native American people directly.

“Wendy made no hesitation. Not about finances, not about logistics, not about time crunch,” Romero-Briones says. “That doesn’t happen in the philanthropic world. It was one of the funnest things I’ve ever done in my job is take all of these people to see all the people I wanted them to meet. It was very affirming.”

Schmidt and her husband see strong networks as the key to building a better world. They’re using their considerable wealth — which Forbes pegs at about $20 billion — to build connections between people and organizations that are working to solve pressing global problems.

“I really do believe in the power of the network,” she says. “It’s not about how big you are but how well connected you are.”

The couple started Schmidt Futures to back the development of new technologies and to support young leaders in science and public service through two programs that seek to connect tomorrow’s leaders: RISE and the Schmidt Science Fellows, both run jointly with the Rhodes Trust.

RISE connects 15- to 17-year-olds who want to dedicate their careers to public service and could do more to help others if they had access to networks of like-minded people.

Schmidt Science Fellows places Ph.D. science graduates in labs that are in a different scientific field than their core area of study for a year so they can work collaboratively across disciplines and build long-term connections with other scientists.

Schmidt says she and her husband do not spend a lot of time thinking about precise plans for their future philanthropy. The only definite plan, she says, is to spend down their giving vehicles during their lifetimes.

“I’m not a person who makes five- or 10-year plans,” she says. “I’m very much in the mind-set that I’m in when I’m sailing or diving. Your attention is on everything around you at that moment — where the wind is, the conditions of the water, adjusting the sails, how you’re making progress towards the goals.” 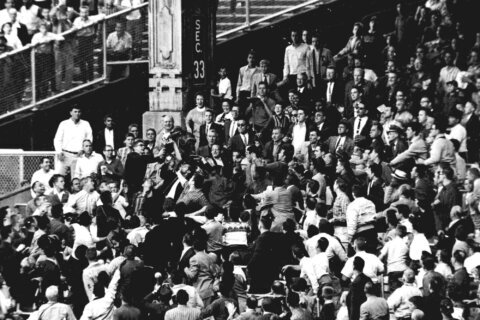 Milestone balls leave fans with a choice: Return it or sell?