DENVER (AP) — For National Park Service fisheries biologist Jeff Arnold, it was a moment he’d been dreading. Bare-legged in sandals, he was pulling in a net in a shallow backwater of the lower Colorado River last week, when he spotted three young fish that didn’t belong there. “Give me a call when you get this!” he messaged a colleague, snapping photos.

Minutes later, the park service confirmed their worst fear: smallmouth bass had in fact been found and were likely reproducing in the Colorado River below Glen Canyon Dam.

They may be a beloved sport fish, but smallmouth bass feast on humpback chub, an ancient, threatened fish that’s native to the river, and that biologists like Arnold have been working hard to recover. The predators wreaked havoc in the upper river, but were held at bay in Lake Powell where Glen Canyon Dam has served as a barrier for years — until now. The reservoir’s recent sharp decline is enabling these introduced fish to get past the dam and closer to where the biggest groups of chub remain, farther downstream in the Grand Canyon.

There, Brian Healy has worked with the humpback chub for more than a decade and founded the Native Fish Ecology and Conservation Program.

“It’s pretty devastating to see all the hard work and effort you’ve put into removing other invasive species and translocating populations around to protect the fish and to see all that effort overturned really quickly,” Healy said.

As reservoir levels drop, non-native fish that live in warm surface waters in Lake Powell are edging closer to the dam and its penstocks — submerged steel tubes that carry water to turbines, where it generates hydroelectric power and is released on the other side.

If bass and other predator fish continue to get sucked into the penstocks, survive and reproduce below the dam, they will have an open lane to attack chub and other natives, potentially unraveling years of restoration work and upending the Grand Canyon aquatic ecosystem — the only stretch of the river still dominated by native species.

On the brink of extinction decades ago, the chub has come back in modest numbers thanks to fish biologists and other scientists and engineers. Agencies spend millions of dollars annually to keep intruders in check in the upper portion of the river.

Under the Endangered Species Act, government agencies are required to operate in ways that will not “jeopardize the continued existence” of listed animals. That includes infrastructure.

Even before the discovery of smallmouth bass spawning below the dam, agencies had been bracing for this moment. The U.S. Bureau of Reclamation recently enlisted a team of researchers at Utah State University to map the nonnative fish in Lake Powell and try to determine which could pass through the dam first.

A task force quickly assembled earlier this year to address the urgency the low water poses for native fish. Federal, state and tribal leaders are expected to release a draft plan in August containing solutions for policymakers who intend to delay, slow and respond to the threat of smallmouth bass and other predators below the dam.

There are a variety of solutions, but many will require significant changes to infrastructure.

In the meantime, National Park Service, U.S. Geological Survey and Arizona Game and Fish Department are moving quickly to try to contain the issue. During an emergency meeting, they decided to increase their monitoring efforts in other shallow areas and block off the entire backwater where the smallmouth bass were found so they can’t swim out into the river.

“Unfortunately, the only block nets we have are pretty large mesh, so it will not stop these smaller fish from going through, but it will keep the adults from going back out,” Arnold said, noting it’s the best they can do with available resources.

Experts say leaving more water in Lake Powell would be the best solution to ensure cool water can be released through the dam, although it’s tough to do in a river under so much stress.

Last month, the Department of the Interior notified the seven western states that depend on Colorado River water that they must devise a way to conserve up to 4 million acre-feet of water in 2023 — more than Arizona and Nevada’s share combined — or face federal intervention. It is unclear where that conserved supply would be stored, but Healy says he hopes Lake Powell is being considered.

“If we want to protect some of the values for which Grand Canyon National Park was established, we need to really think about how water is stored,” Healy said. “That issue needs to be at the table.” 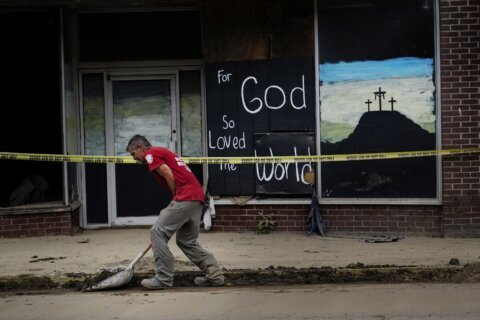