Your deepest, darkest secrets now on display at the National Postal Museum

Nearly a million postcards containing random strangers' mailed-in confessions have been collected for an exhibit at the National Postal Museum. The PostSecret website, which initially posted many of the missives, was an online phenomenon.
Listen now to WTOP News WTOP.com | Alexa | Google Home | WTOP App | 103.5 FM
(1/6) 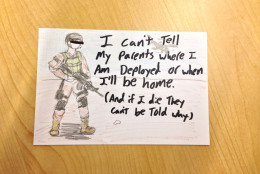 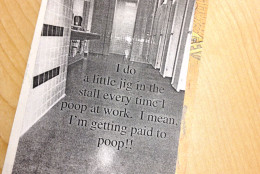 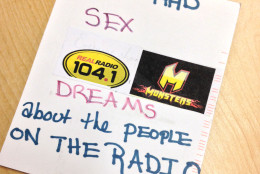 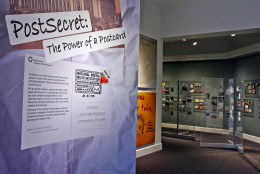 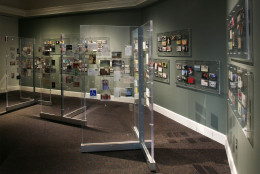 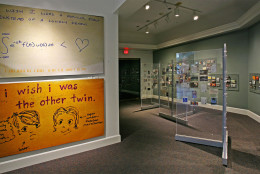 WASHINGTON — For years, thousands of postcards containing random strangers’ deepest, darkest secrets kept showing up in the mail at the nondescript suburban house on Copper Ridge Road, in Germantown, Maryland.

The postcards, initially just a few dozen, were part of what former D.C.-area denizen Frank Warren thought of as a community art project. But the mailed-in confessions, which Warren posted on his “PostSecret” website starting in 2004, became an online phenomenon in the pre-Facebook days of the web and went on to fill six best-selling books.

Nearly the entire collection of messages — more than a million postcards — have now been collected for an exhibit at the National Postal Museum, on display through September 2017.

For Warren, who moved to California last year and has returned to D.C. for an event Friday at the museum, the exhibit of postcard confessions is a homecoming of sorts.

“It’s so exciting to see them kind of find a home there, not far from where the project started,” Warren told WTOP.

The postcards, which Warren likens to visual haiku, range from the heart-wrenching to the hilarious: “I wait until my husband is asleep to pick my nose,” one recently posted card reads. The message scrawled across another postcard reads: “Over 6 years in therapy. Over 10 thousand dollars spent. One question remains — Am I better?”

One postcard mailed in 2013 appeared to contain a murder confession, although police later determined it was a hoax.

Still longing to get something off your chest? You can still send in your postcard to the same Germantown address Warren has used for the past decade: 13345 Copper Ridge Rd. (The house is now on the market, but Warren said he still has a great relationship with the Postal Service, which continues to forward the missives to the West Coast).

During PostSecret’s heyday, when hundreds of postcards were showing up on his doorstep every week, Warren said he dismissed setting up an anonymous P.O. box.

“My wife would’ve preferred that for sure,” he said. “But I think there’s something about the way I set up the project initially that really allowed people to be vulnerable and share with me their deepest secrets and really trust me,” Warren said. “And I think part of that had to do with using my home address rather than an P.O. box, inviting people to share their secrets with me, a real person, not a committee or something else.”

What has Warren learned after a decade reading people’s most guarded secrets?

“One of the secrets I see almost every day written different ways is talking about the loneliness that people feel and how there’s a stigma to that,” Warren said. “People sometimes don’t like to admit it to others — and sometimes to themselves.”

Another lesson: “Everybody has at least one secret that could break your heart,” he added. “And if we could remember that, I think there could be more understanding and maybe more peace.”

“PostSecret: The Power of a Postcard” exhibit runs through September 2017 at the National Postal Museum. Warren will speak about the collection Friday during an appearance at the museum for a Smithsonian at 8 event at 7 p.m. VIP tickets to attend the conversation are $40 at the door.