Bolsonaro seeks to rev up his support with motorcycle rally

BRASILIA, Brazil (AP) — President Jair Bolsonaro led thousands of motorcyclists on a campaign ride through Brazil’s most populous state Friday, seeking to drum up support ahead of October’s elections as he trails in early opinion polls.

Bolsonaro, wearing a black leather jacket, piloted a Honda cycle during the rally that motored about 130 kilometers (80 miles) from Sao Paulo city to Americana. Officials of Sao Paulo state gave no estimate on the number of participants, many of whom carried Brazilian flags or wore the national colors of green and yellow.

“He is a popular president, who is among the people, and the majority is on his side. We have to have these movements in the streets that show what the truth is,” said Leandro Rosa, a 42-year-old supporter who joined in the rally with his son Leonardo, 16, on the back of his motorcycle.

Bolsonaro is focusing much of his campaign attention in Sao Paulo state. Some of his Cabinet ministers resigned in recent weeks to run for Senate seats representing the state and to seek its governorship and are expected to stump for his re-election.

He got more than two-thirds of the votes in the state in the 2018 election, but a survey released this week by pollster Ipespe put him in a close race in Sao Paulo with his main opponent, leftist former President Luiz Inácio Lula da Silva. Da Silva recently tapped Geraldo Alckmin, Sao Paulo’s former governor, as his running mate.

For Brazil as a whole, opinion polls have shown Bolsonaro trailing da Silva, but recently the gap has been narrowing.

Motorcycle rallies by Bolsonaro supporters became popular last year, with events staged in numerous cities across Brazil as a Senate committee began investigating his administration’s handling of the coronavirus pandemic.

The president’s disapproval rating rose during the pandemic as he expressed skepticism about coronavirus vaccines and opposed economic restrictions imposed by local leaders trying to curb the virus’ spread. It has caused more than 662,000 deaths in Brazil, the second most in the world, behind only the United States, according to data from John Hopkins University.

“We have gone through difficult times, two years of pandemic, and today we feel the repercussions of a war on the other side of the world, but we will overcome these obstacles,” Bolsonaro told the motorcyclists.

Pollastri reported from the motorcycle rally. 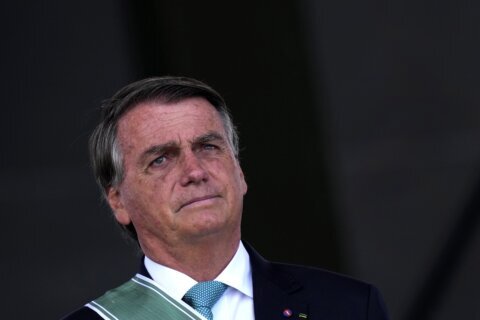