The attack occurred Tuesday outside the University Hospital Center as police tried to escort the director and other staff elsewhere for safety. The hospital said the director briefly lost consciousness and that the crowd ripped the clothes of the deputy general director and threw urine at both. The car of an executive assistant also was seriously damaged, officials said.

A health workers’ union that organized Tuesday’s demonstration and previous ones that turned violent to protest vaccine requirements and other measures told local media that members are seeking to recover lost wages after being suspended for refusing to become vaccinated as required by law.

Guadeloupe’s prefect, Alexandre Rochatte, condemned the attacks and said the government will prosecute those responsible.

“These deliberate abuses are unacceptable and intolerable,” he said in a statement.

The French government declared a “state of health emergency” for Guadeloupe and several other overseas territories Wednesday, citing a “considerable rise” in virus cases due to omicron’s fast spread and calling it a “health catastrophe putting the population’s health in danger.” The measure allows the government to issue decrees that curtail temporarily freedoms, including restrictions on movements, trade, entrepreneurship and gatherings. It also enables the government to requisition necessary goods and services to fight against a health disaster.

Guadeloupe, an island of some 400,000 people, has one of the lowest vaccination rates in France.

Vaccinations are mandatory for all French health workers, while France’s COVID-19 health pass is required to enter food establishments, cultural venues and sport arenas, and for long-distance travel. The measures have met the stiffest opposition in Guadeloupe and Martinique, prompting rioting that also reflects long-running frustrations over inequality with the French mainland.

Guadeloupe, an overseas department of France, uses the euro currency. One-third of the island’s population lives below the poverty line, and the cost of living is higher than in the French mainland. Water supplies have been a major problem in recent years because of obsolete pipes.

Anger over France’s handling of a toxic pesticide in Caribbean banana fields also has fueled mistrust in the government’s COVID-19 vaccine policies, along with misinformation shared on WhatsApp or Telegram groups.

Venezuelan girl drowns in Rio Grande amid migration to US 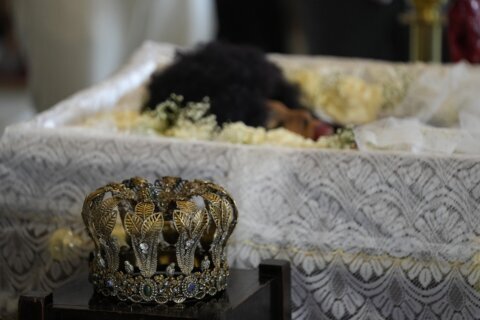