WASHINGTON — The world held its collective breath last week when the body of a 3-year-old Syrian boy was seen face down on an Italian beach.

On the morning of Sept. 2, Aylan Kurdi and his family set out with his family in a small dingy that capsized minutes after they left a beach resort in Bodrum, Turkey.

There were 16 people in a boat only meant for eight, and they were headed 2.5 miles to the Greek island of Kos.

Within hours, Kurdi’s small corpse washed ashore. Then his mother. Then his 5-year-old brother.

The overwhelming empathy that’s surged through the region was confronted by an unpleasant reality: Some members of the European Union don’t want the refugees.

“Let us not forget,” said Hungarian Prime Minister Viktor Orban, “that those arriving have been raised in another religion, and represent a radically different culture. Most of them are not Christians, but Muslims.”

That’s a stark summary of Hungary’s view and treatment of refugees arriving there. Instead of open arms, tens of thousands of people were stranded against their will.

In a commentary for German publication Frankfurter Allgemeine Zeitung, Orban said, race and religion considerations should drive the response to the crisis.

“This is an important question, because Europe and European identity is rooted in Christianity,” he said. “Is it not worrying in itself that European Christianity is now barely able to keep Europe Christian? If we lose sight of this, the idea of Europe could become a minority interest in its own continent.”

Furthering his pressure on the E.U., Orban announced Monday it is planning to seal off its border in the coming weeks, and demanded that Germany and Austria stop taking refugees.

It’s also not the answer the UN High Commissioner for Refugees hoped to hear in response to a call for the Europe Union to accept more than 200,000 refugees from conflict zones like Syria, Iraq and Afghanistan.

“Europe cannot go on responding to this crisis with a piecemeal or incremental approach,” High Commissioner António Guterres said in a statement laying out six guidelines ahead of a key round of emergency EU meetings on the crisis. “No country can do it alone, and no country can refuse to do its part.”

Germany plans to push ahead with a robust welcoming policy for asylum seekers and war refugees.

“It is a great humanitarian challenge and my country will do its utmost to help those who need our assistance and our welcome,” said Ambassador Peter Wittig. “Eight-hundred thousand refugees and asylum seekers will come to my country [this year]. We’ve already taken in 120,000 as of 2 weeks ago from Syria alone.”

But Wittig said not all of those seeking refuge in Germany can be accommodated.

“Those who want to come to us to live a better life, make more money or more decent job, we cannot take all of those of the latter category – that’s clear. We need to focus on the neediest – the persecuted and those who are fleeing a war.”

“The others might even have to return once they arrive because we cannot take all of them in,” Wittig said.

The European Union is pressing other countries to help find homes for the mass of people in desperate circumstances.

In a statement to WTOP, the U.S. State Department said the U.S. has provided more than $4.1 billion in humanitarian assistance since the start of the crisis in Syria, “more than any other single donor, to help address dire humanitarian conditions faced by 7.6 million displaced people inside Syria and 4 million Syrian refugees throughout the region, particularly in Lebanon, Turkey, Jordan, Iraq and Egypt.”

“Of this,” the statement continued, “more than $296 million in humanitarian aid has been provided just to Syrian refugees in Turkey.”

However, in terms of the number of refugees admitted, the statement said, “the United States is likely to admit 1,500 – 1,800 Syrian refugees total by the end of fiscal year 2015, and expects to see an increase in that number in fiscal year 2016.”

Of the four million Syrian refugees, two million are believed to be in Turkey.

The National Security Council said in a statement Tuesday that the U.S. government “is actively considering a range of approaches to be more responsive to the global refugee crisis, including with regard to refugee resettlement.”

Also a part of the relief package are hygiene kits, kitchen sets, new arrival kits, and other supplies such as clothes, blankets, sleeping mats, and plastic sheeting.

The slow pace of the war against ISIL is believed to be the driving factor for the mass exodus, but Wittig said there’s more to it.

“I think this crisis goes beyond the most recent developments of the Islamic state’s spreading in the region – which has compounded the insecurity,” Wittig said. “It’s more than that. It’s a middle east that’s falling apart in some regions and in North Africa where instability has increased so much. Now we’re seeing people, not only from those two regions, but also from the Balkans and Afghanistan.”

He warns the refugee crisis will not end soon.

“Beyond the immediate response,” Guterres said, “it is clear that this situation will require us to reflect seriously about the future. This massive flow of people will not stop until the root causes of their plight are addressed.” 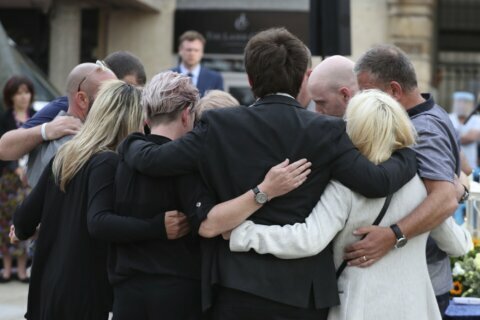