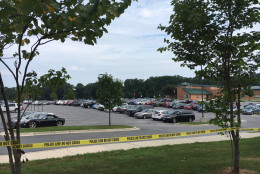 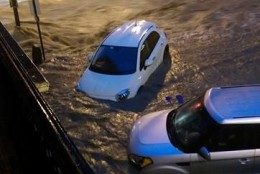 For many residents and visitors, the first step to getting to normal included a visit to Ellicott City’s Centennial High School where scores of cars caught up in the weekend torrent were towed by Howard County road crews.

More than 180 cars had been towed from downtown Ellicott City by Monday morning, according to a Facebook posting from the Howard County Police Department. By the end of the day, crews were still working to remove about 50 vehicles from the Main Street area, police said.

Owners of vehicles that were towed after the flooding can pick them up at the Centennial High School parking lot from 8 a.m. to 8 p.m. through Aug. 7, police said. Owners will be not be charged for the towing.

Owners should bring identification to retrieve their vehicles, police said. “If an owner does not have ID due to the nature of the disaster, police will attempt to verify ownership through a series of questions and other methods,” Howard County police said in a Facebook post.

Cars not claimed by 8 p.m. on Aug. 7 will be towed to a contracted storage facility at the owner’s expense, according to police.

Brian Haverly, of North Potomac, was waiting in the high school parking lot Monday morning to see if his black Mustang was among the recovered vehicles. It wasn’t yet, but officials told him it might be among another batch of vehicles that would be dropped off later in the day.

Waverly and his girlfriend were visiting Ellicott City Saturday for a birthday dinner at Portalli’s, an Italian restaurant at 8805 Main St., he said. That’s when a normal downpour turned dangerous. At one point, the whole building, just a few hundred feet from the banks of the Patapsco River, shook “because the water was hitting the supports,” he said.

“Before we knew it, like, there was water coming in through the kitchen, and it started to rush in to the bottom floor of the restaurant,” he said. “So everybody kind of started to panic. And we all cleared upstairs. By the time we were upstairs, it was like 5 or 6 feet of water in the street, and it just kept getting higher and higher.”

He said he saw cars floating past the restaurant’s windows. At one point, he and other restaurant patrons tried unsuccessfully to help pull a woman from her car, he said. He later learned the woman was OK, he said.

After the rain slowed, and he returned to the street, Haverly said the few cars left there “looked like there were mangled” or “like cars that you picked up from a wrecking yard to put into a movie set. You could barely tell some of them were even still cars.”

State and local officials estimate a full recovery will last months and cost millions of dollars.

Howard County officials said they would hold an information session Monday night for residents and business owners affected by the flooding. State and county officials as well as nonprofits offering resources will be available at the Ellicott City 50+ Center at 9411 Frederick Road in Ellicott City from 4:30 p.m. to 8 p.m.

WTOP’s Jamie Forzato contributed to this report from Ellicott City. 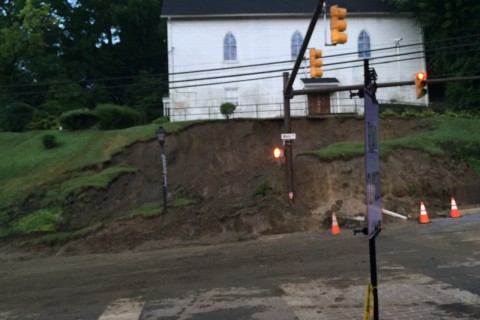