After recent incidents in the D.C. area, antisemitism was on the minds of many who attended the annual National Menorah Lighting near the White House.
Listen now to WTOP News WTOP.com | Alexa | Google Home | WTOP App | 103.5 FM
(1/6) 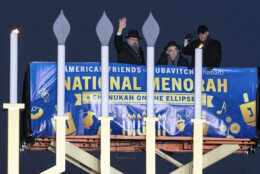 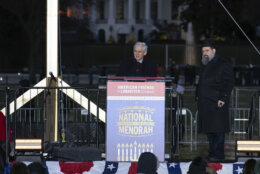 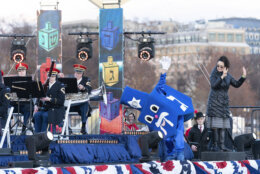 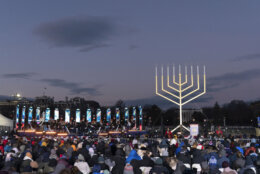 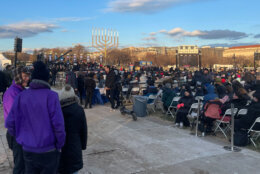 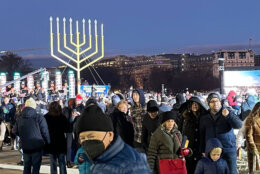 Sunday evening marked the beginning of Hanukkah, and people celebrated the night at the annual National Menorah Lighting at the Ellipse near the White House.

However, after recent hateful incidents in the D.C. area, fears of antisemitism was also on the minds of some who attended.

The massive national menorah now shines brightly in front of the White House after it was lit up in front many, including U.S. Attorney General Merrick Garland.

“May we never stop working to ensure that Americans will always be able to gather today as we are doing tonight to light the menorah in our nation’s capital and under the protection of its laws,” Garland said.

While Garland was there to celebrate the kick off of the Festival of Lights, he also called for people to fight against hate and violence toward the Jewish people and faith.

“We must stand up against the disturbing rise in antisemitism,” Garland said.

Garland said his grandmother likely would have died in the Holocaust had the U.S. not offered her refuge.

“As a descendant of those who fled persecution because they were Jewish, it is especially meaningful to be here tonight as we light this menorah,” Garland said.

Recent disturbing acts of hate were unfortunately on the minds of some people at the event. In Montgomery County, which is adjacent to D.C., school officials found vandalism and antisemitic graffiti this weekend on a sign at Walt Whitman High School.

One of the attendees, Al Schwartz, said that recent hate crimes in the area made it important for him to attend the ceremony.

“With the incidents in Montgomery County over the last two or three days, I said I have to come out and show my support,” Schwartz said.

Hanukkah is an eight day observance that begins on the 25th day of the month of Kislev within the Hebrew calendar. Because most of the world goes by the common use Gregorian calendar, the holiday begins on different dates each year.

This year, Hanukkah began at sundown on Dec. 18 and will end at sunset on Dec. 26.

At the ceremony, Garland said all Americans have a moral obligation to stand up against hate and bigotry in any of its forms.