A new test for Lyme disease comes from an unlikely source: a summer intern

After seeing the effects of Lyme disease firsthand, a summer intern at George Mason University helped create a new test that may aid in the detection of other diseases.
Listen now to WTOP News WTOP.com | Alexa | Google Home | WTOP App | 103.5 FM

WASHINGTON — Temple Douglas grew up in the fields of Lucketts, Virginia, where the ticks that cause Lyme disease lie in wait in the tall grass.

Her mother and brother struggled with the disease and before she was out of her teens, Douglas — an aspiring scientist — was fighting back.

She was a high school student on a summer internship at George Mason University when she learned researchers there were working on a new form of nanotechnology that they hoped could be used to detect early signs of cancer. Douglas suggested they use it to create a new test for Lyme.

“I didn’t know what to expect,” Douglas said. “But I had an idea and I thought I would ask.”

Alessandra Luchini — one of the developers of the new nanotechnology — became her mentor, instructing the teenager in the intricacies of the lab. The summer internship took on a life of its own, with Douglas becoming a fixture in the laboratory in late afternoons and evenings. She would travel to Mason after her classes at Thomas Jefferson High School for Science and Technology in Fairfax, Virginia.

“She performed experiments, she wrote the paper, she answered the questions of the scientific reviewers,” Luchini said, noting that Douglas stayed involved with the project while getting her undergraduate degree at Princeton University.

Those were the years of painstaking trials on the new urine test for Lyme, which researchers say enables doctors to detect the disease easily and effectively in its earliest stages.

“This is our centerpiece,” said Lance Liotta, co-director of Mason’s Center for Applied Proteomics and Molecular Medicine.

It works this way: tiny nanoparticles developed by the George Mason scientists trap and measure  markers for the disease found in very low concentrations in body fluids. The nanoparticles find the tiniest traces missed by most diagnostic tests.

Liotta said that in the case of Lyme disease, “the overall goal is to measure pieces of the Lyme bacteria that are shed into the urine.”

Right now, samples are sent for analysis to Ceres Nanoscience, a private company based in Reston, Virginia, that is partnering with the GMU scientists.

The National Institutes of Health funded most of the research that led to the now-patented nanotechnology, and the state of Virginia is helping  to pay for the development of a commercially available version of the Lyme test that can be performed right in a doctor’s office or at home,  much like the pregnancy tests currently on the market.

Luchini says it is as simple as mixing a solution with a body fluid sample. And she emphasizes that Lyme is only the beginning.

“This concept is applicable to any disease as long as we identify the causative agent,” Luchini said.

The George Mason researchers are already testing it on malaria, Ebola and tuberculosis — all illnesses where early identification and treatment is invaluable. Zika may be added to the list.

The GMU lab has also entered into a partnership with infectious disease specialists from Johns Hopkins University and together they are exploring the potential for portable testing in the developing world, where access to medical care is limited.

As for Temple Douglas, she is now a PHD candidate in biomedical engineering at Virginia Tech.  She has switched her focus from Lyme disease to research on cancer cells, but one thing has not changed.

Ask her to spell out her lifetime goal and she doesn’t miss a beat: “I want my research to help people,” she said.

Editor’s note: This story has been updated to reflect the correct spelling of Lucketts, Virginia. 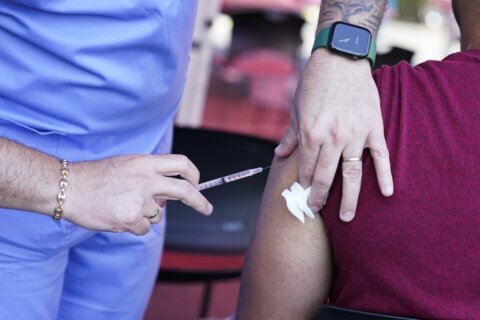