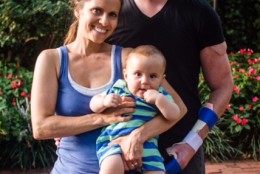 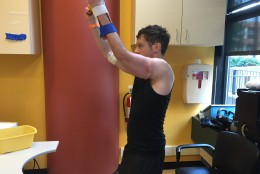 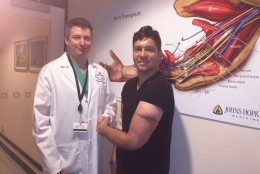 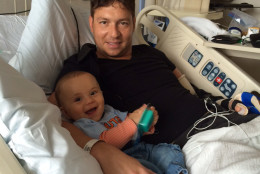 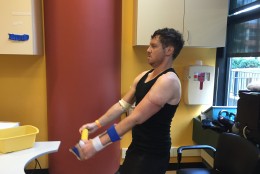 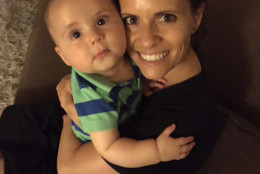 WASHINGTON — To Jeff Swedarsky, the simple act of holding his infant son is a miracle worth fighting for.

Last June, the 34-year-old food tour operator, athlete and musician from Alexandria, Virginia, lost his left arm in a tragic accident. One year later, he got a new one.

The life-changing loss came without warning on a balmy summer evening in the nation’s capital. Along with his wife and two friends, Swedarsky headed out to a jazz concert, but stopped along the way to check out a wedding venue for the newly engaged couple.

Swedarsky was standing at the top of a long, spiral staircase —  perfect, he remembers, for a bridal entrance — when for some unexplained reason, he fell.

“Straight down the stairwell, almost 40 feet,” Swedarsky recalls. And it all happened in the blink of an eye.

His back was against the stairs, and without thinking, he grabbed a banister during the fall to try to right himself. The force was so great, it tore off his left arm.

“I lost my arm, but at the same time it saved my life,” Swedarsky says.

He landed on his feet and blacked out. When he regained consciousness at the bottom of the staircase, he looked up at his wife and friend as they tried to stop the bleeding and said, “I need my arm.”

A trauma team at a nearby hospital tried to reattach the severed limb, but the damage was too great. Swedarsky went into an emotional downward spiral that lasted for weeks.

However, his spirit and determination to overcome the loss took hold when he connected with a man he calls “Jaimie.”

Dr. Jaimie Shores is a plastic surgeon and clinical director of the Human Upper Extremity Allotransplantation program at Johns Hopkins. Prior to Swedarsky’s case, only two arm transplants had been performed in the United States, and no one had ever transplanted an arm so close to the shoulder, where Swedarsky’s arm detached from his body.

All the same, the team at Johns Hopkins was willing to give it a try.

Shores warned Swedarsky that it might take years to find a donor arm. Instead, it took a few months, and the surgery was performed on June 17, 2015 — almost one year to the day after Swedarsky lost his limb.

“Jeff got lucky getting it that quickly,” Shores says. Once the team found a deceased donor of similar size, age and skin tone to Swedarsky, there was no time to waste.

Two surgical teams were involved — one to remove the arm from the cadaver and one to tackle the delicate task of attaching it to Swedarsky, layer by layer, from bone to skin.

It is a time-consuming operation (the surgery took 11 hours), and yet, time is of the essence.

“Every moment that is going by that there is not blood flow to that transplanted arm, we are worried about tissue death,” Shores says.

He adds that the most exciting and relief-producing moment of the surgery comes when blood starts to move again through the arteries and veins of the transplanted arm.

“You can see the hand going from white to being pink, and you see that pink demarcation of life versus no life kind of just marching out at the end of the hand,” Shores says.

And while a successful operation takes planning and precise execution from the transplant team, Shores emphasizes that the key is to select the right patient — someone with the motivation, dynamism and support network to see it through. Someone like Jeff Swedarsky.

“Jeff is the kind of guy who lost an arm and said, ‘How am I going to push forward now, what are the options available, what are the solutions,’” Shores says.

Rehab is now Swedarsky’s full-time job. It is a long, difficult haul because while the bones, arteries, muscles and skin could be connected during surgery, the nerves from his shoulder down to the fingertips of his new arm have to regenerate, and this happens at an excruciatingly slow pace of about 1 inch per month.

“It just takes a second for you to lose something like your arm, and it takes a lifetime for it to come back,” says Swedarsky after a session of physical therapy.

He knows the journey ahead is a long one, but he is undaunted. In the beginning, he told his doctors he would go further than any transplant recipient had ever gone before.

Swedarsky has many reasons to persevere and even to smile. His wife Sharon was pregnant at the time of the accident, and their son Ari was born six months later.

“He won’t have a clue that I had to work so hard just to be able to play a little catch with him or teach him a little music,” says the new dad about his plans for the future.

Shores says it will be a tough road for Swedarsky, but if anyone can make a transplanted arm fully his own, Jeff can.

“The more lofty the goal, the higher you are going to reach,” Shores says.

Why get the HPV vaccine? ‘No one is immune from the potential for exposure’