New York emerges as exception to strong election for Dems

While Democrats were celebrating a stronger-than-expected midterm performance across much of the U.S. this week, New York was emerging as…
Listen now to WTOP News WTOP.com | Alexa | Google Home | WTOP App | 103.5 FM

While Democrats were celebrating a stronger-than-expected midterm performance across much of the U.S. this week, New York was emerging as a notable exception where losses and lackluster results prompted a round of soul-searching and finger-pointing inside the party.

There were signs of Republican inroads even in the U.S. Senate race. Senate Majority Leader Chuck Schumer, who is broadly popular in New York and makes a point of visiting each of the state’s 62 counties every year, faced his closest reelection since 1998. While he’s won typically won reelection by at least 30 points, Schumer’s win over Republican Joe Pinion was less than half that Tuesday.

“We did worse than Democrats nationally,” said Mark Levine, the Manhattan borough president and a Democrat. “I don’t think you can blame Joe Biden for what happened in New York State.”

Both Democrats and Republicans pointed to a confluence of issues behind the results: Lackluster campaigning and a slow response from Democrats to the way Republicans harnessed fears about violent crime. A redistricting plan was supposed to help Democrats, but backfired. The GOP also made some notable inroads in suburbs and diverse urban neighborhoods.

Democrats were braced for setbacks elsewhere this week, particularly in Florida, a onetime swing state that has become more reliably Republican. But the New York challenges were especially disappointing because they happened in a state where Democrats have twice as many registered voters as Republicans.

“It’s one thing for the Florida Democratic party to be an absolute neutered disgrace. It’s another thing to have deep problems in the Democratic Party in a state like New York,” Democratic strategist Jon Reinish said.

The first warning sign for Democrats came in the spring with the state’s redistricting process, which Reinish called “a complete disaster from beginning to end.”

The state’s new political maps drawn by the Democratically-controlled Legislature would have given Democrats an advantage in 22 of 26 House races, but were thrown out by a court. The court sided with Republicans who said the maps were unconstitutionally gerrymandered and hired an expert to draw a more competitive map.

Republicans who hold 8 of 27 House seats this year are on track to have at least 10 of New York’s 26 House seats starting in 2023. Two other tight races are too early to call, but the GOP’s victories included the trophy ousting Maloney.

Zeldin, a Long Island congressman, was initially expected to face long odds against beating Hochul. His alliance with former President Donald Trump and vote as a member of the House against certifying the 2020 election results were expected to be too toxic in New York, which had not elected a Republican governor in 20 years.

But the congressman came close to succeeding, prompting a frustrated, late-stage scramble from Democrats.

While Republicans are disappointed they didn’t win the governor’s race, the New York GOP is the most energized it’s been in decades, said Chapin Fay, a former Zeldin adviser who ran a political action committee this year working to build Republican inroads with Hispanics, Asian Americans, Eastern Europeans, Jews and African Americans in New York City.

“New York is more purple than anyone would have suspected,” Fay said.

Zeldin tapped into fears about crime and campaigned aggressively with frequent appearances in liberal New York City to spotlight shootings, stabbings and incidents of subway violence.

Hochul, who is the first woman to serve as New York governor, had focused her campaign on defending abortion rights and portraying Zeldin as too extreme. But when polls showed him closing in on her in the final weeks, the governor began speaking more frequently about public safety.

New York crime rates are not near the gritty highs of decades past, but they have increased since the pandemic. A string of high-profile violent incidents, including some shootings and fatal shoves onto the tracks of New York City subways, have heightened the fears.

“I don’t think we should parrot Republican demagoguery on this but we have to tell a compelling story about what we’re doing to make the city and the state safer,” Levine said. “We pretty much entirely ceded the issue to the other side and they ended up being able to define the terms.”

Jay Jacobs, the chair of the New York State Democratic Party, defended the party’s campaigning and said many critics were sitting on the sidelines.

He said the party was hurt by the redistricting result and said the original, Democrat-drawn maps were “a well-intentioned effort that was an overreach.”

Jacobs said the party was damaged in the minds of independent voters by efforts to portray it as beholden to its most progressive members, along with a tough political environment.

“We are a blue state,” he said, “that had a particularly unique set of challenges in this election, which happened to come in a very tough political year for the incumbent party.”

This story has been updated to correct that the overturned redistricting maps would have given Democrats an advantage in 22 of 26 races. 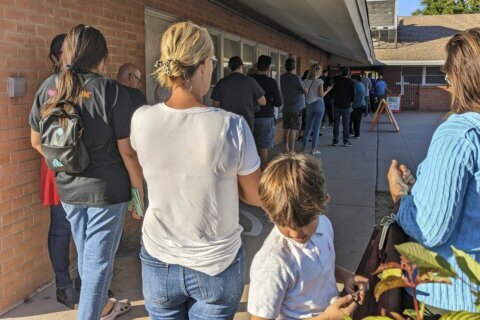