WASHINGTON (AP) — Jill Biden and Olena Zelenska, the first lady of Ukraine, met again Tuesday, this time at the White House, following up after their first-ever meeting in eastern Europe on Mother’s Day.

President Joe Biden, who has said the United States will support Ukraine in its fight against Russia for “as long as it takes,” helped his wife welcome Zelenska, the wife of President Volodymyr Zelenskyy, as her black SUV rolled to a stop on the driveway. He gave her a bouquet that included sunflowers, Ukraine’s national flower.

The women embraced and posed for press photos before going inside, where the administration briefed Zelenska on how the U.S. is trying to help Ukrainians who are suffering mentally and emotionally from the war.

Zelenska is on a high-profile visit to Washington this week.

“It’s so nice to see you again, since I last saw you,” Jill Biden said. She recalled their May 8 meeting, held when the U.S. first lady was traveling in eastern Europe and drove from Slovakia into western Ukraine to meet with Zelenska, who at that point had not been seen publicly since Russian President Vladimir Putin launched his attack on Ukraine in late February.

Biden visited Romania and Slovakia in May in a public show of support for Ukrainians, mostly women and children, who had fled to those countries after Russia’s invasion.

“When I came back, one of the things that I said was you cannot go to a war zone and come back and not feel the sorrow and pain of the people that I met,” Biden said, recalling that Zelenska had introduced her to many refugees.

“You asked me then to talk about mental health issues, and so I came back and I talked to my team,” Biden said. She said she had sent Zelenska a letter outlining “what we’re doing to help with mental health for the mothers and the children who have really, clearly suffered such tragedy, and the atrocities.”

Biden, joined in the Blue Room by Linda Thomas-Greenfield, the U.S. ambassador to the United Nations, and other administration officials, said they would take turns updating Zelenska on how their agencies are helping. Doug Emhoff, Vice President Kamala Harris’ husband, participated.

Zelenska did not speak while American and Ukrainian journalists were in the room.

When Jill Biden concluded her brief opening remarks, she remembered Zelenska’s translator and asked, “Is that too long?”

Before she arrived at the White House, Zelenska accepted a human rights award Tuesday on behalf of the Ukrainian people in recognition of their fight for freedom from Russia. The Dissident Human Rights Award was presented by the Victims of Communism Memorial Foundation.

“It is an honor to be here and accept this award in the name of every Ukrainian man and woman fighting Russian aggression today,” Zelenska said through a translator.

On Wednesday, she is scheduled to address members of Congress in an auditorium at the Capitol, following a similar appearance by her husband at an earlier point in the war.

Zelenska had largely disappeared with the couple’s two children during the war’s opening months, and has been raising her public profile since she emerged from seclusion for the Mother’s Day meeting with Biden.

Zelenskyy discussed his wife’s trip to Washington in his nightly address to Ukrainians, saying she will speak to Congress on behalf of all Ukrainian mothers and women.

“And I really believe that it will be heard by those on whom decision-making in the U.S. depends,” he said. 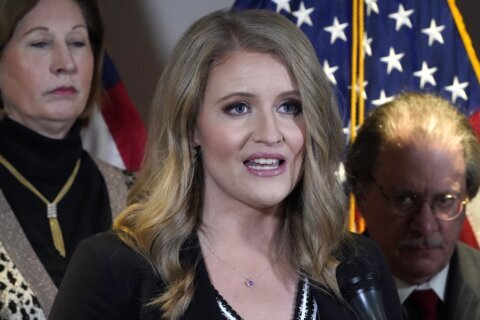