Treasury Secretary Janet Yellen is warning that countries that undermine the sanctions the United States and its allies have imposed on Russia will face consequences for their actions.
Listen now to WTOP News WTOP.com | Alexa | Google Home | WTOP App | 103.5 FM

WASHINGTON (AP) — Treasury Secretary Janet Yellen on Wednesday urged China to use its “special relationship with Russia” to persuade Russia to end the war in Ukraine.

Beijing “cannot expect the global community to respect its appeals to the principles of sovereignty and territorial integrity in the future if it does not respect these principles now,” Yellen said at the Atlantic Council, a nonpartisan think tank.

Yellen’s speech at the Atlantic Council comes a week before the world’s finance ministers and central bank governors convene in Washington for the International Monetary Fund-World Bank Group Spring Meetings. Her direct appeal to China underscores an increasing frustration that the United States and its allies have with a country that has only deepened its ties with Russia since the invasion of Ukraine.

“The world’s attitude towards China and its willingness to embrace further economic integration may well be affected by China’s reaction to our call for resolute action on Russia,” she said.

The U.S. and its allies have used sanctions to weaponize the global economy against Russia over its war in Ukraine. There aren’t any countries yet subverting the sanctions, but there are fears among the allies that China, which has criticized the Western sanctions, could potentially do so. Also of concern is India, which has taken a neutral stance on the Russia-Ukraine war and recently made a major purchase of Russian oil, a source of tension with the U.S. as it tries to cut off Moscow’s energy income.

Yellen said that countries that undermine the sanctions the U.S. and its allies have imposed on Russia will face consequences for their actions.

“The unified coalition of sanctioning countries will not be indifferent to actions that undermine the sanctions we’ve put in place,” Yellen said.

Yellen, leaving open the question of what the consequences for flouting the sanctions could be, said Russia’s ongoing war in Ukraine has “redrawn the contours” of the global economy, which includes “our conception of international cooperation going forward.”

The IMF and the World Bank hold an annual conference that addresses issues affecting the global economy. This year, the meetings will take place April 18-24 in Washington both virtually and in person. The Russian invasion of Ukraine — and how world powers should manage the spillover to economies — will take center stage.

Yellen, answering a question about how the prospect of worldwide food shortages and rising inflation could affect political unrest globally, said “this will be an urgent concern for us next week, to try to think about how we can stave off starvation around the world.”

Roughly 155 million people in 55 countries faced acute hunger in 2020, an increase of 20 million people from the year before, according to the World Food Program.

Last week, Yellen told a U.S. House panel that Russia’s aggression in Eastern Europe will have “enormous economic repercussions in Ukraine and beyond,” adding that the rising prices of energy, metal, wheat and corn that Russia and Ukraine produce are “going to escalate inflationary pressures as well.”

The U.S. is currently facing historic inflation rates not seen since December 1981. The Labor Department reported Tuesday that prices in March climbed 8.5% from a year ago.

While inflation began to increase before Russia invaded Ukraine in February, the war has strained supplies of oil and gasoline. Half of the past month’s increase in consumer prices came from gas.

Yellen said that she hopes cooperating countries can tackle the world’s biggest problems, despite the war.

“I see this,” she says, “as the right time to work to address the gaps in our international financial system that we are witnessing in real time.” 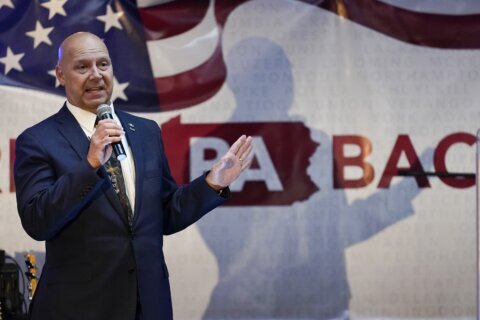