Coronavirus News: Fairfax Co. votes to increase substitute teacher pay | Is it time to get a COVID-19 booster? Which one? | Local cases of COVID-19 | How many in DC region are vaccinated?
Home » Government News » Right-sizing the force: Army… 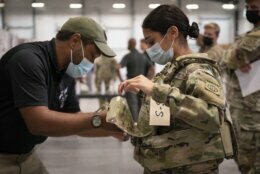 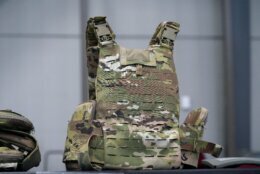 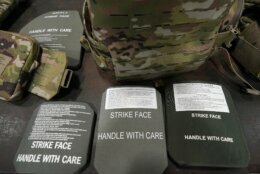 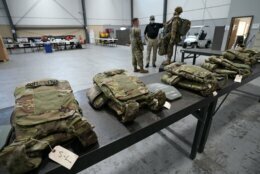 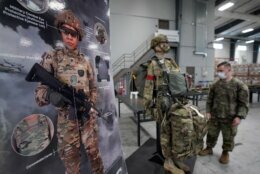 WASHINGTON (AP) — Army Capt. Kim Pierre-Zamora remembers the protective vest she was issued when she went to basic training a number of years ago. It was a size medium that hung down too far and made it difficult for her to even bend over to pick up something.

It’s a common complaint from female soldiers and small-stature men who have struggled with the bulky armor they’ve worn over two decades of war in Iraq and Afghanistan. But in recent weeks, the Army for the first time has begun handing out armor in three additional sizes: extra small short, small short and small long. The armor can be adjusted in multiple ways to fit better and allow soldiers to move faster and more freely.

The “modular scalable vest” was distributed to more than 4,500 soldiers so far in the 82nd Airborne Division at Fort Bragg, North Carolina, over the past few weeks. Female soldiers also will be able to get new versions of the combat shirt more tailored for a woman’s shape. Those shirts are given out only when soldiers deploy.

Army researchers have been working on the changes for years, trying to come up with combat gear that is lighter and fits better.

Initially, the effort to add more sizes was in response to complaints from female soldiers, who are increasingly moving into combat jobs previously open only to men. As more women deployed to a war zone, they often found that they were shorter and smaller than many of the men and needed armor that allows for narrower shoulders, a bust and hips.

Early on, however, the Army made the decision to make the vests unisex, The decision, said Lt. Col. Stephen Miller, was based on the belief that smaller male soldiers who might need a short or small sized vest would refuse to take anything that was “stamped female.” He’s product manager for soldier protective equipment at PEO Soldier, an Army organization that coordinates the fielding of armor, weapons and other equipment.

That move has proved to be a success.

Nearly 25 percent or 1,200, of the 82nd Airborne soldiers so far have gotten armor in the three new sizes, said Pierre-Zamora, who works as an assistant product manager at PEO Soldier. Of those 1,200, about 100 have been women.

There are five other regular sizes that have been available previously — extra small, small, medium, large and extra large.

“Outwardly we both look like we’re about the same size, but her torso is a little bit shorter than mine,” she said.

The vest, she said, also allows soldiers to move the ballistic armor plates that can be inserted for additional protection. The soft pockets that hold the plates can be shifted up, so they don’t rest on female soldiers’ hip bones, impeding quick and agile movement. The shoulder straps are also adjustable.

The small long version of the vest better fits some thinner men.

“There are a lot of small men who were probably wearing a vest that was too big for them,” Miller said.

Miller said he was one of them.

“I’ve always been given a large or a medium in the past,” he said. But he was given a size small in the new version “because someone who knew what they were doing fitted me for it, and said, ‘No, the way the MSV (modular scalable vest) fits, this is where it goes.’”

Another soldier he knows, he said, is more than 6 feet tall, but is also very thin. He’s usually gotten a medium or large based on his height and the length needed, but he now is using the small long — one of the new sizes just made available.

The new combat shirt, however, has a new version specifically for female soldiers, because the problem was the shape, not the sizes. Miller said it has shorter sleeves, a flare at the bottom, and added protection along the sides of the bust.

The new one, he said, eliminated the problem that female soldiers had with the shirt riding up on their hips. But women who have more of a straight build can still get the unisex version.

Acknowledging that complaints about the Army’s body armor have been circulating for years, Miller said it took time to find vendors who could change the size and shape of the ballistic plates, while also making them lighter and effective in protecting soldiers from blasts.

“Stopping bullets is a complex problem,” Miller said. “It’s really taken a lot of deliberate effort to adapt the system to something that weighs less, gets after a better form factor, as well as to get after the soldiers who weren’t specifically accounted for in the previous systems.”

The major difficulty, he said, was cutting the weight of the plates. The new ones weigh about a pound less. So far, he said, just two vendors met the lesser weight goal without sacrificing protection.

Eventually, more than 6,000 soldiers in the 82nd Airborne Division’s three brigades are expected to get the new armor. Miller said each soldier is individually fitted by trained personnel. Soldiers go through a 30-minute class to learn how the armor can be adjusted.