WASHINGTON (AP) — The House’s chief law enforcement officer is tightening security for traveling lawmakers as Congress reassesses safety in an era when threats against members were surging even before Donald Trump’s supporters attacked the Capitol.

Capitol Police officers will be stationed at Washington-area airports and the city’s Union Station train depot on busy travel days, the acting House sergeant at arms said in a memo obtained Friday. Timothy P. Blodgett said he’s set up an online portal so lawmakers can notify the agency about travel plans, and he urged them to coordinate trips with local police and airport officials and report suspicious activity to authorities.

Capitol Police “will not be available for personal escorts,” said the email, sent late Thursday. “However, they will be in place to monitor as members move through the airport.”

The steps underscored political divisions that grew increasingly acrid, even potentially dangerous, during Trump’s invective-filled four years as president. In addition to personal verbal attacks against perceived foes, Trump stirred up supporters with relentless streams of bogus conspiracies like his false charge that Democrats stole November’s election from him.

The animosity lawmakers face has spread among themselves, with numerous Democrats saying they are wary of GOP colleagues who’ve said they carry guns in Washington. Republicans have bristled at new screening devices installed by House Speaker Nancy Pelosi, D-Calif., that lawmakers are required to pass through when entering the House chamber, where carrying firearms is not allowed.

“The enemy is within the House of Representatives,” Pelosi told reporters this week in a chilling characterization of Congress’ internal tensions. She cited “members of Congress who want to bring guns on the floor and have threatened violence on other members of Congress.”

In the latest instance of Capitol Hill’s spiraling personal hostility, Rep. Cori Bush, D-Mo., tweeted Friday that she was moving her office away from that of fellow freshman Rep. Marjorie Taylor Greene, R-Ga., “for my team’s safety.” Bush wrote that a maskless Greene and her staff “berated me in a hallway,” and wrote later that past Greene tweets have made her feel unsafe.

Greene responded with a tweet of her own, saying: “She is lying to you. She berated me.” Greene also called Bush, who is Black, “the leader of the St. Louis Black Lives Matter terrorist mob who trespassed into a gated neighborhood to threaten the lives of the McCloskey’s.”

Last summer, Bush was among marchers at whom Mark and Patricia McCloskey waved guns after the protesters walked past their mansion in a private St. Louis neighborhood. The McCloskeys have pleaded not guilty to weapons and evidence tampering charges.

Bush is now one of Congress’ most progressive members. She has sponsored a measure that could lead to expulsion for lawmakers who — like Greene — backed Trump’s unjustified effort to reverse his November election defeat.

Greene has drawn fire from Democrats and some Republicans for past social media posts reported by various news organizations in which she’s suggested support for killing Democratic politicians, unfounded QAnon theories and racist views.

Congress’ 535 members travel frequently between their homes and the capital, and many have said they feel vulnerable in their districts and when they travel. Videos have shown people insulting lawmakers at airports, including Republican Sen. Mitt Romney of Utah, who has criticized Trump.

The Jan. 6 Capitol riot “reminds us of the grim reality that members of Congress are high-profile public officials, and therefore face ongoing security threats from the same domestic terror groups that attacked the Capitol,” 32 House members, nearly all Democrats, wrote to congressional leaders this week. Five people died in the attack, including a Capitol Police officer, and the House impeached Trump on a charge of inciting insurrection.

The House lawmakers’ letter said while 902 threats against members of Congress were investigated in 2016, the number surged to 4,894 cases in 2018 and was tracking upward, according to Capitol Police testimony in 2019.

Limited local police resources and social media strewn with personal information and their real-time locations make lawmakers more vulnerable when they are home, their letter said. The House members asked for tightened security procedures. Pelosi told reporters that some steps have already been taken and that she’ll likely seek money to bolster safety.

Members have been told they can use their office expenses to buy bullet-proof vests, which several have said they are wearing. Blodgett’s letter said they can use those accounts for security for themselves and their offices, and said a Federal Election Commission opinion lets them use campaign funds for home security systems.

The acting chief of the Capitol Police, Yogananda D. Pittman, said this week that “vast improvements” are needed to protect the Capitol and adjacent office buildings, including permanent fencing. Since Jan. 6, the Capitol has been surrounded by a tall barrier and the grounds are patrolled by National Guard troops.

Many lawmakers have long resisted giving the nation’s symbol of democracy the look of a besieged compound, and leaders were noncommittal about permanent fencing.

Trump backers smashed their way into the U.S. Capitol after a morning speech in which he urged them to go there as Congress formally affirmed Joe Biden’s election victory. That riot left five people dead and prompted the House to impeach him for inciting insurrection, for which he faces a Senate trial in February. 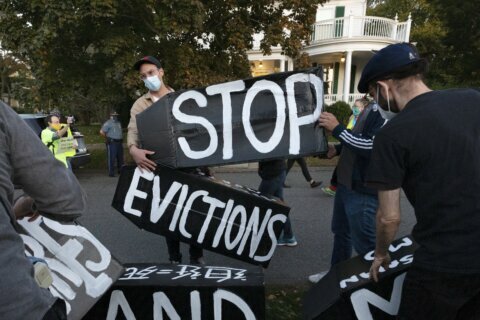