RUTH BADER GINSBURG, 1933-2020: Trump pledges woman for court, pushes Senate to move on pick | How Ginsburg's death could reshape the election | How to honor RBG by supporting her favorite causes
Home » Government News » How pandemic and politics…

How pandemic and politics are interfering with the 2020 census

If the 2020 census fails to count everyone in the US, experts warn that the consequences will be serious, widespread and long-lasting. No matter where you live in the US, many important things in your community are at stake.
Listen now to WTOP News WTOP.com | Alexa | Google Home | WTOP App | 103.5 FM

If the 2020 census fails to count everyone in the US, experts warn that the consequences will be serious, widespread and long-lasting.

The census is the basis for determining how many representatives each state gets in Congress and how an estimated 1.5 trillion dollars in federal funding are spent. It only happens once every 10 years.

And time is running out to get it right.

So if you haven’t had a chance to follow what’s going on with the 2020 count, now is the time to take notice — because no matter where you live in the US, many important things in your community are at stake.

“The census, when you boil it down, is about two things: It’s about power and it’s about money,” says Jeff Robbins, a census administrator for the city of Mesa, Arizona.

And one thing, Robbins says, is keeping him awake at night: “What happens when we run out of time, and not everybody’s counted?”

Currently, the count is scheduled to end September 30. Legal battles are raging over a series of last-minute changes to the census. And groups across the country are scrambling to boost response rates before it’s too late.

Census officials maintain they’re committed to producing a complete and accurate count. And a top official for the agency said in a recent court declaration that the bureau is on track to do so.

But demographics experts, local officials and advocacy groups have a lot of concerns that this year’s tally won’t be accurate, because a pandemic and politics got in the way. They’re raising alarm bells that a significant undercount is likely.

If that happens, here are some of the key things at risk:

States could lose representatives in Congress

The population numbers from the 2020 census could play a big role in shaping the balance of power in Washington. The data is used to redraw congressional district boundaries. And through a process known as apportionment, the data will be used to determine how many representatives each state gets in Congress. Some states could lose seats if there’s an undercount.

Martha Maffei says that’s something she’s worried could happen again in her state — New York — which already lost two seats after the 2010 census. As the executive director of SEPA Mujer, an immigrant advocacy group in Long Island, she’s been pushing for more people to participate in the 2020 count. But she says widespread fear in the community has made it tough, and the Census Bureau’s recent decision to end the count a month early made it even tougher.

“It’s going against our efforts. It just makes it very hard. I think all our elected officials, our representatives, congressmen, everybody should be doing something to reverse that decision, because we are going to be hurt very badly,” she says.

It’s possible the deadline could change; that’s the subject of a legal battle playing out in a California federal court.

Several lawsuits are also pending over the Trump administration’s recent announcement that it plans to exclude undocumented immigrants from any census figures used to determine the number of representatives states get in Congress. On Thursday, a panel of federal judges in New York blocked that directive, ruling that Trump’s July memorandum on the census violated federal laws. If the Justice Department appeals that ruling, the Supreme Court could have the final say.

Even before a pandemic upended plans for the 2020 count, experts were worried a lot of children would be missed in this year’s census. Undercounts of young children — and particularly Latino and African American children — have been a perennial problem. Now, those fears are even more acute.

“We are very concerned,” says Dr. Sally Goza, president of the American Academy of Pediatrics.

And we’ve seen before what happens when children aren’t counted. More than 2 million young children were missed in the 2010 census count because of a range of errors that census officials have been analyzing for years.

“That cost more than a billion a year in funding for programs because they weren’t counted,” Goza says. “That’s a lot of lost money that could help our children, and we just don’t want to see that lost again.”

Programs that support children’s healthcare, food and education would be impacted, she says. Among them: The National School Lunch Program, Head Start and the State Children’s Health Insurance Program.

“This is critical,” Goza says. “This is a once-in-a-decade opportunity. It’s going to affect us for the next 10 years. The negative ramifications really affect our children.”

Robbins, the Arizona official, suggests thinking of it another way.

“If you think of kids that are in the fourth grade, they’re going to be basically out of the school system by the time you’ve got another shot at this,” he says. “This affects generations.”

A recent analysis by researchers at UCLA warned that the 2020 census was is on track to severely undercount immigrants, low-income people and people of color. Neighborhoods where they live are showing particularly low response rates, according to Paul Ong, who co-authored the report and directs the Center for Neighborhood Knowledge at the university’s Luskin School of Public Affairs.

“What is surprising is the magnitude of it, and how much farther behind we are compared to 2010 in terms of racial differences. … That is very disturbing,” Ong says.

One of the key areas that could be impacted as a result, Ong says, is health care. That includes funding for hospitals, health care clinics and programs such as Medicaid and Medicare. And, Ong says, census data also could be used to determine where to set up Covid-19 testing sites or how to prioritize vaccine distribution.

Elizabeth Alex, who’s been leading census outreach efforts in Maryland, Virginia and Pennsylvania for the immigrant advocacy organization CASA, says it’s troubling — but no coincidence — that the communities hardest hit by the Covid-19 pandemic have also been falling behind in the 2020 census count.

“The same communities that are the hardest to count are the most important to count,” she says, “because they already have been under-resourced and underrepresented.”

Money for roads, bridges and transportation might fall short — or not go to the right place

In fiscal year 2015, more than $38 billion in funding for highway planning and construction was distributed using census data, according to the Census Bureau.

And that’s just a fraction of the federal dollars spent on roads and bridges annually, with funding decisions informed by census figures.

Funding for public transportation also is influenced by the census, Ong says.

And if some groups, such as people of color, aren’t represented in census numbers, Ong says, many neighborhoods that need money for public transportation might not get enough.

Businesses might be stuck using flawed data for important decisions

Government officials aren’t the only ones who turn to census data to make decisions. Businesses use it, too.

“The cost of not having a good census is really high,” Kenneth Prewitt, who directed the 2000 census, said at a recent event. “It means chambers of commerce miscalculated the age structure of their cities and towns — and guess what, they planned for a much younger audience or a much older audience, and they’re wrong.”

A major concern, Prewitt says, is that officials are operating in a compressed timeframe that won’t give them enough chance to verify data to make sure it’s accurate. Which means all kinds of decisions business and governments make down the line might not be accurate either.

“The country will be littered with these mistakes made because the numbers — the fundamental numbers — were a mistake,” he says.

It’s not just about federal dollars. Some state funding could be at risk as well

The billions in federal funding that are meted out based on census data aren’t the only dollars at stake.

For example, some states, like Arizona, also use census population data to distribute state tax revenue for services like police, firefighters and transportation, Robbins says.

Officials in Arizona estimate that over the course of a decade, about $31,000 in combined state and federal funding is lost for every person that’s missed in the census, and some $70,000 if a household isn’t counted.

2nd GOP senator a ‘no’ to filling court seat before election 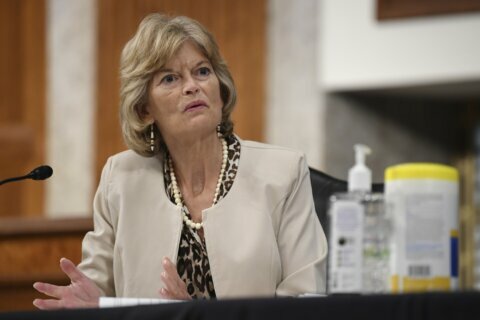