The Virginia Democrat is one of 100 senators performing the most unique form of jury duty an American can serve: considering articles of impeachment against the president.
Listen now to WTOP News WTOP.com | Alexa | Google Home | WTOP App | 103.5 FM
(1/2) 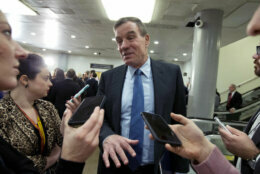 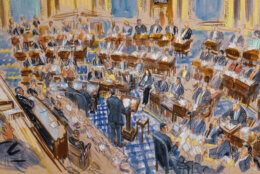 Sen. Mark Warner has built a successful tech business, held the office of Virginia governor, and currently serves as a U.S. senator and vice chair of the Senate Intelligence Committee.

And now as part of President Trump’s impeachment trial, he’s on jury duty.

Warner must relinquish his cellphone and remain silent much of the day, “under pain of imprisonment.”

The Virginia Democrat is one of 100 senators performing the most unique form of jury duty an American can serve: considering articles of impeachment against the president.

He likened it all to a “yin-yang” experience of duality, sitting in the Senate chamber for more than eight hours a day and being prohibited from talking, while listening to opening arguments in a trial with historic implications.

“At some points you’re sitting there praying for the clock to turn around and thinking, ‘Oh my gosh,’ I’ve heard this part of the case before,” Warner said. “And the next moment you realize: ‘Oh my gosh. I’m sitting here for only the third time in American history in the impeachment of a president. And we better all get this right.'”

Warner — unlike some other senators who have said they’ve already made up their mind about the case against the president — said he is trying to keep an open mind as he considers the evidence.

“I’m not naive. Impeachment is a political process,” he said Friday in an interview with WTOP. “But I also think it is a constitutional responsibility. And we all need to take a deep breath and try to constrain our political beliefs and listen to the facts, listen to the evidence, listen to what the law is.”

Warner said he believes most senators are trying to do that. He noted that on Thursday, there seemed to be “less antsiness,” and that there were fewer senators moving around the floor during the House managers’ opening arguments.

While the senator knows a lot of his colleagues are “troubled” by the accusations related to the president and the withholding of aid to Ukraine, he said he’s uncertain whether enough Republicans will join Democrats in voting next week to subpoena current and former White House officials as witnesses.

Warner — who has closely followed developments related to Ukraine and Russia on the intelligence committee — hopes that witnesses will be called.

“I think most Americans … they know what a fair trial is,” he said. “A fair trial is, you put up evidence and witnesses and then you make a decision.”

Many Republicans have argued that the Senate shouldn’t call witnesses, because it was the House’s responsibility to build its case, once it decided to move ahead with an impeachment inquiry.

Warner said he looks forward to hearing the White House legal team present its opening arguments on behalf of the president.

“I want to treat their side with respect,” said the senator, noting he’d be surprised if they don’t try to rebut the House managers’ case.

The president is charged with abuse of power and obstruction of Congress.

While the issues before Warner and the other senators are weighty, days that stretch out well into the night have lighter moments. Senators are technically supposed to remain at their desks during the trial. But at times, they roam a bit. They also go to the back of the chamber and stretch.

A few have even brought fidget spinners.

For some, it can be hard to stay awake in the later hours, but coffee may not be brought into the chamber — only water and milk. Warner said he’s typically not a coffee drinker, but due to the long days he’s had a few cups — outside of the chamber.

When senators are hungry, Warner said, they can go to the cloak room, where they have a lot snacks to choose from, including fruit, beef jerky, potato chips, cookies and candy.

“Maybe it shows a little bit about the health of the senators — by the end of the evening, most of the cookies and Pringles were gone, but there were a lot of apples and tangerines left,” he said.