WASHINGTON — It might have been cold and dreary out on Sunday, but that didn’t stop Holton-Arms alumnae from holding a candlelight vigil outside the White House to support Christine Blasey Ford, Brett Kavanaugh’s accuser.

Sunday’s vigil came just hours before the New Yorker magazine broke details on a second allegation, levied by Deborah Ramirez, who claims Kavanaugh sexually assaulted her during his time as a Yale University freshman in the 1980s.

Bralove, an alumna of the private Holton-Arms School which Blasey Ford once attended, was one of several women who spoke to about fifty people gathered outside the White House on the week of her expected testimony to Congress.

“I’m really out here to support Dr. Blasey Ford, and also speak out in support of women who are brave enough to come forward, and those who are not quite ready,” Bralove added.

Sunday’s vigil was one of several across the country occurring simultaneously in Blasey Ford’s defense. For about an hour outside the White House north lawn, women shared their experiences with sexual assault — and spending years without coming forward in fear of public shaming or retaliation.

“This is not a political issue, this is a human issue, this should not be politicized,” said Jennifer Pierotti Lim, co-founder and executive director of Republican Women for Progress. “Our system would be so much better and more protection of women, and especially women victims, if there were more women at the table.”

With Blasey Ford’s testimony expected on Thursday, several protests are planned in D.C. with an overarching purpose of supporting her as she heads to the Senate Judiciary Committee.

Several protesters were arrested on Monday in Senate offices as part of a Women’s March demonstration titled “Cancel Kavanaugh.” Hundreds of protesters filed into the offices of members of Congress intent on delivering their message before the committee eventually votes.

One chant: “We believe Dr. Blasey Ford, we believe Deborah Ramirez, we believe Anita Hill” — the later hearkening back to the troubled nomination of Supreme Court Justice Clarence Thomas, who in 1991 faced a similar allegation of sexual assault. Nominated President George H.W. Bush, Thomas was ultimately confirmed by a majority vote in the Senate, joined by 11 Democrats. 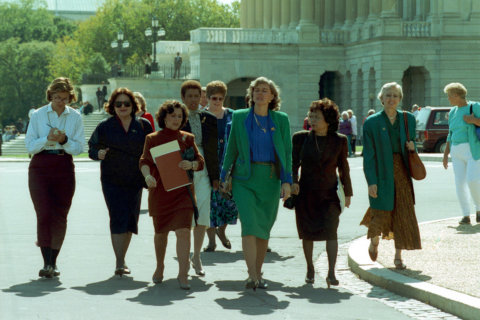 Amid Kavanaugh controversy, echoes of Anita Hill on Capitol Hill