Nearly a year after Hurricane Maria barreled across the Caribbean and devastated Puerto Rico, the island has become the focal point of a stormy political debate involving Congress and the White House over how the Trump Administration responded to the disaster.
Listen now to WTOP News WTOP.com | Alexa | Google Home | WTOP App | 103.5 FM

WASHINGTON — Nearly a year after Hurricane Maria barreled across the Caribbean and devastated Puerto Rico, the island has become the focal point of a stormy political debate involving Congress and the White House over how the Trump Administration responded to the disaster.

President Trump’s tweet this week, asserting that Democrats highlighted the death toll of nearly 3,000 to make him look bad, stunned lawmakers — including Republicans.

3000 people did not die in the two hurricanes that hit Puerto Rico. When I left the Island, AFTER the storm had hit, they had anywhere from 6 to 18 deaths. As time went by it did not go up by much. Then, a long time later, they started to report really large numbers, like 3000…

…..This was done by the Democrats in order to make me look as bad as possible when I was successfully raising Billions of Dollars to help rebuild Puerto Rico. If a person died for any reason, like old age, just add them onto the list. Bad politics. I love Puerto Rico!

House Minority Leader Nancy Pelosi (D-CA) on Friday said she didn’t want to dwell on the president’s comments, but felt compelled to respond on behalf of hurricane victims.

“The attitude from the administration and the Republican Congress is unacceptable,” she said at a U.S. Capitol news conference, flanked by other Democrats. “We have a moral obligation to do better, not only to finish the job in Puerto Rico and the Virgin Islands, but to prevent the same type of inadequate response from ever happening again.”

One of those joining Pelosi was Rep. Nydia Velazquez (D-NY), the first Puerto Rican woman to be elected to Congress. She noted the hurricane that struck Puerto Rico led to massive power outages and “the longest blackout in American history.” She also called the president’s tweets “shameful.”

“As president of the United States your very first responsibility is to protect the lives of American citizens after disasters,” she said. “Instead, your administration created a humanitarian crisis through inadequate preparation and an incompetent response.”

The Democratic lawmakers called on the administration to support more funding for Puerto Rico and the U.S. Virgin Islands, as well as back a formal review into what went wrong.

President Trump has aggressively defended the administration’s response to last year’s hurricanes and called the efforts to help the people of Puerto Rico an “unsung success.”

While some Republican lawmakers have distanced themselves from the president’s comments on Puerto Rico and the death toll, others say they understand his frustration with lingering criticism.

“The idea that a year after the fact we’re complaining — look, we’ve gone back in and done a really pretty amazing job of trying to rebuild,” said Rep. Tom Cole (R-OK), noting the island’s infrastructure was in poor shape before the hurricane. “I don’t how the relief effort could have done any better than it did, quite frankly.”

A month after the hurricanes, in October of last year, Congress approved at $36.5 billion disaster relief package, which included money for Puerto Rico.

The Federal Emergency Management Agency (FEMA) says it has spent billions of dollars in Puerto Rico, restoring power and helping with property repairs and a massive cleanup. 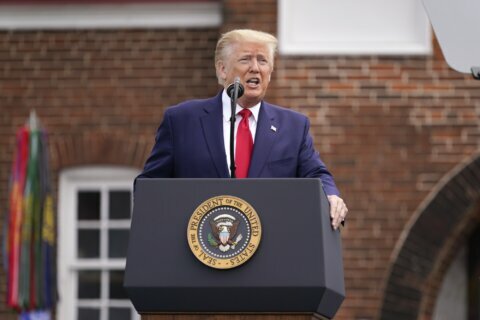