The Latest: Rose says his 65 sounds easier than it was

Justin Rose finished talking about his seven birdies and an eagle over 10 holes and said, “Sounds easy.”

Not only did he have a four-shot lead after his 7-under 65, it was 9.5 shots better than the average score Thursday at the Masters. And it was a big difference from last November, when 53 players broke par in the first round. This time, there were only 12 players in red numbers after the opening round.

It was the sixth time he has had at least a share of the lead after any round at the Masters, and the fourth time in the opening round. Jack Nicklaus is the only other player to have had an 18-hole lead four times. Then again, Nicklaus has won six green jackets. Rose has none.

Only a dozen players managed to break par in the opening round of the Masters.

No one was close to Justin Rose.

The 40-year-old Englishman has a commanding four-stroke lead after a blistering 7-under 65. He began his surge with an eagle at No. 8 and played the final 11 holes at 9 under, shooting 30 on the back side.

Brian Harman and Hideki Matsuyama are the only other players in the 60s. Both posted 69 on a day when many top players struggled with the rock-hard greens and a breeze that howled at times.

This is a familiar position for Rose, who has the first-round lead for the fourth time in his Masters career. He’s never won the green jacket, settling for a pair of runner-up finishes.

“Even though I don’t have an arm in the jacket yet, I’ve been there to see what it’s all about,” Rose said. “I kind of want to keep things in perspective a little bit until I can’t ignore it anymore.”

It was another tough day at Augusta National for Bryson DeChambeau.

The longest hitter on the PGA Tour struggled to a 4-over 76, extending the troubles he had in November at the first Masters held in the fall.

A double-bogey at the par-4 fourth was a sign of trouble to come, and three bogeys sent him tumbling down the leaderboard.

DeChambeau finally made his first — and only birdie — at the par-5 15th. But he finds himself a whopping 11 strokes behind leader Justin Rose after the opening round.

Struggling with the distance of his shots, DeChambeau posted his highest score in four appearances at Augusta as a professional. At least he’s got plenty of company: top players such as Rory McIlroy (76), Jason Day (77) and Patrick Cantlay (79) also struggled.

At the 2020 Masters, DeChambeau made the cut but was never in contention. He finished 18 shots behind winner Dustin Johnson.

On a day when it was tough to go low, Justin Rose made it look easy in the opening round of the Masters.

The 40-year-old Englishman shot a 5-under 65, pushing him to a four-stroke lead at Augusta National.

Rose played the last 11 holes at 9 under, beginning his surge with an eagle at the par-5 eighth.

He could have matched a couple of records with a birdie at the final hole but gladly settled for par.

Rose shot 30 on the back side, one off the tournament record shared by Mark Calcaveccia (1992) and David Toms (1998). Rose just missed the mark for largest lead after the opening round, as well.

Still, it was an amazing performance when so many top players were struggling. Defending champion Dustin Johnson opened with a 74. Rory McIlroy struggled to a 76. Long-hitting Bryson DeChambeau was 4 over with three holes to play.

Rose, on the other hand, turned in the best score of his Masters career, His previous low was a 67.

Tommy Fleetwood has made the 23rd ace in Masters history.

Fleetwood holed out the 170-yard shot at the famed 16th hole, raising his arms in triumph when the ball bounced a couple of times and rolled straight into the cup.

Amazingly, it was the second straight tournament in which Fleetwood has made a hole-in-one. He had another two weeks ago at the Match Play Championship.

Even with the ace, Fleetwood was 2 over for the round with two holes to play.

Justin Rose has surged to the top of the Masters leaderboard with an amazing run that began just before the turn.

The 40-year-old Englishman pushed his score to 6-under in the opening round — a surge that began with an eagle at the par-5 eighth.

With two holes remaining, Rose was three shots clear of the field on a day when most players were having trouble breaking par.

Defending champion Dustin Johnson shot a 74, Rory McIlroy struggled to a 76 and Bryson DeChambeau was at 5 over through 13 holes.

One bad shot turned into one big number for Jordan Spieth.

Coming off a victory in the Texas Open, Spieth was 1 under at the Masters when he sent his drive well right into the trees on the ninth hole. He thought he had enough of a gap in the pine trees to give it a shot. It wasn’t big enough. It hit a tree and went further back. Spieth put his third shot just short of the green and looked to have a chance to escape with a bogey.

But then he three-putted for a triple bogey and fell back to 2 over.

Justin Rose, meanwhile, was charging up the leaderboard. Rose was 2 over through seven holes. An eagle on the par-5 eighth hole was the start of a six-hole stretch he played at 6-under par.

Rose was at 4 under and leading with five holes to go. With the wind stronger than in the morning, Rose was the only player under par still on the golf course. Brian Harman and Will Zalatoris each posted 69 earlier.

Dustin Johnson finished his first round as defending Masters champion with a double bogey for a 2-over 74. And so end a record streak he owned at Augusta National.

Johnson had 11 consecutive rounds under par at the Masters. Even in tough conditions, he was in position to keep the streak going. He was 1 under until a bogey on the par-3 16th hole. And on the 18th, he went right into the trees, left of the green, chipped some 25 feet long and three-putted for a double bogey.

The last player to open with a 74 and win the Masters was Tiger Woods in 2005.

Johnson was only five shots out of the lead when he finished.

Brian Harman has gone from last man in the Masters to the first name on the leaderboard Thursday.

Harman had little reason to believe he would be at Augusta National this year. He was at No. 95 in the world a month ago when he tied for third at The Players Championship. That got him into the Match Play, where he reached the quarterfinals. And that was enough to get him to No. 49 in the world and into the Masters.

He had three birdies over his last six holes for a 3-under 69. Harman was tied with Hideki Matsuyama among those who finished early. Marc Leishman also was at 3 under at the turn.

Harman is making only his third start in the Masters.

At this time last year, Will Zalatoris was playing on the Korn Ferry Tour. Off to an early start, he delivered the first sub-par round at the Masters, a 2-under 70.

The pandemic forced a shift to last November that produced record low scoring by defending champion Dustin Johnson (20-under 268) and the field (average score 71.75). With a return to a spring date, tournament officials promised a return to the firmer, faster conditions.

Zalatoris actually dipped as low as 3 under after an eagle at No. 15, but gave back a shot on the next hole. A trio of internationals — Hideki Matsuyama of Japan, Christiaan Bezuidenhout of South Africa and Englishman Paul Casey — were still on the course at 3 under and leading the tournament.

The early leaderboard at the Masters has a very international feel.

Si Woo Kim of Korea, Corey Conners of Canada and Christiaan Bezuidenhout of South Africa were sharing the early lead Thursday at Augusta National, with all at 2 under in their opening rounds.

Kim and Conners were through nine holes. Bezuidenhout was through five holes. With 49 players on the course for the opening round, only 10 were under par.

Meanwhile, Viktor Hovland of Norway has bounced back nicely from early trouble. Hovland triple-bogeyed the opening hole, then birdied three of his next five holes to get back to par for the day.

Defending champion Dustin Johnson — who made a total of four bogeys on his way to the Masters title in 2020 — opened with a bogey Thursday and was even through four holes. Among those following Johnson at Augusta National: his father-in-law, Wayne Gretzky.

Viktor Hovland opened his Masters with a disaster.

Hovland, the low amateur when he last played the Masters in 2019, opened with a triple-bogey 7 on the first hole Thursday. He sent his tee shot into the trees left of the fairway, then needed two shots from there to get onto the fairway.

His fourth shot to the back pin location went off the green. He chipped on, then two-putted.

Hovland parred No. 1 his first three times playing it at the Masters, then made birdie in the final round two years ago. It was his first triple-bogey in 73 holes of competition at Augusta National.

It wasn’t the only big number early in the opening round of the Masters. Amateur Joe Long made a 7 on the par-4 fifth hole, and 1988 Masters winner Sandy Lyle had a quadruple-bogey 7 on the par-3 fourth hole.

That matched the second-highest score in Masters history at No. 4. Henrik Stenson made a quintuple-bogey 8 there in 2011.

The first group has reached the turn at the Masters, and scoring is about what was expected. Hudson Swafford was at 2 under through nine holes, picking up birdies on the par-5 second and par-3 fourth holes without a bogey on his card.

With 29 players now on the course at firm, fast Augusta National, no one has reached lower than 2 under and five players were under par.

The forecast called for scattered showers, though any rain chances on a course that has been dry for a week were most likely after the first round was ending.

Sandy Lyle’s round fell apart with a quadruple-bogey 7 on the fourth hole. The 63-year-old Scot won the Masters in 1988. From the front bunker, he sent it well over the green, took two more shots to get back to the front of the green and took three putts to get down from there.

The 85th Masters has started with two honorary tee shots and one former player who only had to raise his driver to make it memorable.

Lee Elder was invited to take part in the ceremonial start. The 86-year-old Elder was the first Black golfer to compete in the Masters in 1975. Augusta National announced in November he would be joining six-time Masters champion Jack Nicklaus and three-time champion Gary Player.

Elder’s health wouldn’t allow him to take a swing. Instead, he raised his driver on a cool morning that was warmed by enormous applause from spectators that lined both sides of the tee box.

Masters Chairman Fred Ridley said Elder’s has blazed a trail that inspired golf and future generations with a message that golf belongs to everyone.

Among those on the tee were Phil Mickelson and Bubba Watson wearing green jackets as past champions, and Cameron Champ, one of four players of Black heritage on the PGA Tour.

The tournament began a short time later. Defending champion Dustin Johnson tees off at 10:30 a.m., while Jordan Spieth is in the last group. 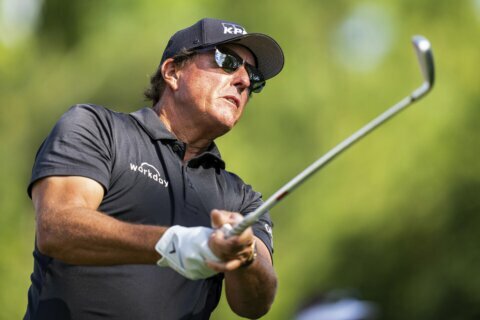 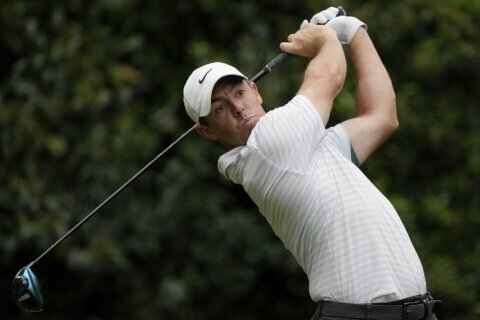