The military flyovers and fireworks for President Trump’s Fourth of July celebration will cause the halting of flights in and out of Reagan National Airport twice, for a total of more than two hours, on Thursday, the Federal Aviation Administration announced Tuesday morning.

The military flyovers and fireworks for President Trump’s Fourth of July celebration on the National Mall will cause the halting of flights in and out of Reagan National Airport twice, for a total of more than two hours, on Thursday, the Federal Aviation Administration announced Tuesday morning.

Operations will be suspended from 6:15 to 7:45 p.m. Thursday for the flyovers, which will include the U.S. Navy’s Blue Angels, F-22 fighter jets and possibly other military aircraft, as well as Air Force One, and between 9 and 9:45 p.m., during the fireworks.

“We were aware there were likely going to be some disruptions, but we weren’t aware of the exact times,” said Micah Lillard, a spokesman for the Metropolitan Washington Airports Authority. “But we do know now, based on what the FAA has released.”

The move was brought on by the flyovers and the unusual location and size of the fireworks, which will be shot off from the National Mall, Lillard said.

Both Lillard and the FAA said passengers should check with their airlines for the details of any changes to their flights.

There will be no impact on operations at Dulles or BWI-Marshall airports, the FAA said.

The flyover is part of what is being called a “Salute to America,” which will be held on the Mall Thursday and will also include a display of tanks. The gates open at 3:30 p.m.

The FAA said later Tuesday that operations at the airport had been suspended before, for events such as the 2015 Arsenal of Democracy flyover. 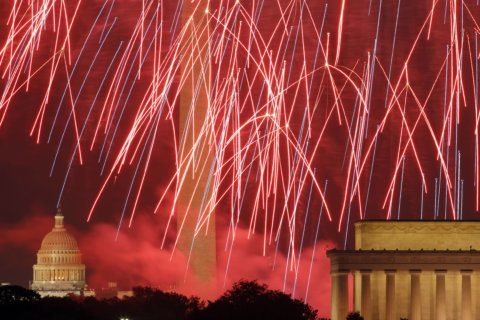 Yes, there will be tanks at Trump’s Fourth of July event — but there’s a catch