President Biden has embarked on an ambitious agenda for his first 100 days in office, facing the challenge of ramping up vaccine distribution during the pandemic and providing financial assistance to millions of struggling Americans.
Listen now to WTOP News WTOP.com | Alexa | Google Home | WTOP App | 103.5 FM

President Biden has embarked on an ambitious agenda for his first 100 days in office, facing the challenge of ramping up vaccine distribution during the pandemic and providing financial assistance to millions of struggling Americans.

His $1.9 trillion Covid relief package has been advancing in congressional committees, which are fleshing out the details.

The House Ways and Means Committee has passed part of the package that includes $1,400 checks for many Americans. The checks would go to individuals who earn less than $75,000 a year and under $150,000 for couples.

The legislation would also boost federal unemployment benefits from $300 to $400 a week and expand the child tax credit.

The legislation is moving forward under the process of budget reconciliation, which would eventually allow Democrats to pass the measure with or without Republican support. The U.S. Senate could pass the package by a simple majority, which has led to some criticism from Republicans who say that President Biden and Democrats are not making good on pledges of bipartisanship.

President Biden has said he still wants to get GOP support for his plan, but has also indicated that Americans can’t continue to wait for financial help.

Congressional Democratic leaders have pledged to press ahead with the legislation.

“The goal is to put vaccines in people’s arms, children back in school and workers back in their jobs and money in people’s pockets,” said House Speaker Nancy Pelosi.

President Biden recently announced plans to expand the number of vaccinations against COVID-19, after initially setting a goal of administering 100 million vaccine doses in his first 100 days in the White House.

The White House now hopes to have enough of the vaccine to inoculate 300 million Americans by the end of July.

Biden has been critical of former President Donald Trump, saying that the previous administration had no detailed plan to vaccinate most of the country.

Congressional Democrats hope that with Donald Trump’s second impeachment trial now behind them, they can focus more of their work on ramping up the response to the coronavirus, both from a health and economic standpoint.

Pelosi recently sent a letter to members of the Democratic caucus, outlining the work that nine committees are doing to tackle parts of President Biden’s “American Rescue Plan.”

Ultimately, the House Budget Committee will put together the parts of the plans. After the legislation clears the Rules Committee, it can be voted on by the full House.

The Senate will also need to pass a Covid relief measure, which could get tricky, since the upper chamber is split 50-50.

Democratic leaders want to get the legislation to the president’s desk before March 14, which is when the federal supplement of federal unemployment runs out.

President Biden’s 100th day in office will come at the end of April. 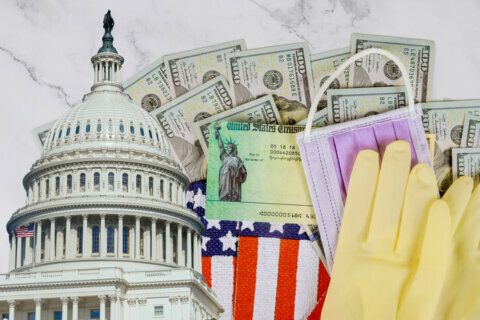