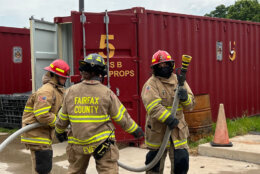 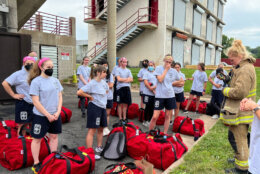 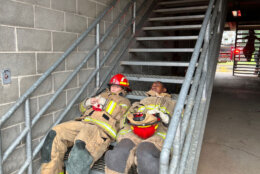 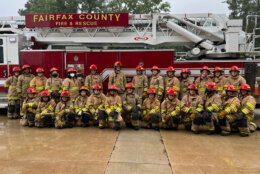 For most teenagers, summer vacation usually means sleeping late and hanging out with friends. But for two dozen Fairfax County, Virginia, girls, the beginning of their summer break meant time in a different type of school.

The girls, ages 12 to 17, took part in the Girls Fire and Rescue Academy, a four-day event organized by the Fairfax County Fire Department. Last week, 24 girls graduated from the academy with a taste of what it is like to be a firefighter and EMT.

The girls take part in classroom activities and training drills; they learn how to work together holding a hose to put out a car fire. They take a ride in the bucket of a tower fire engine that goes 95 feet into the air, make their way through a dark maze, and search for injured people in an abandoned building as part of a rescue drill.

Fairfax County Fire Department Hazmat Technician Mary Kate Black, who also helped to create the academy, told WTOP that the girls at the daily camp are set up in groups of four designed to represent an engine company — which means they do everything together.

While Black said a goal of the academy is to show the girls what it means to be a firefighter, it also aims to show off the strengths of being female. Black said the instructors want to show the girls how cool it is to be strong and different, and to encourage them to get out of their comfort zones.

Lilly McNerney, 15, a student at Westfield High School, said she has always wanted to be a firefighter/EMT and believes it was fate that she was accepted to the academy, and that it happened during a week when she was free this summer. She said she was surprised by the amount of work involved in being a firefighter, and didn’t realize how heavy the tools are. “It was a phenomenal experience,” McNerney said.

Harika Akundi, a student at Thomas Jefferson High School for Science and Technology, wants to help her community when she gets older and thought taking part in the academy was a good start.

She said she has always had an appreciation for the work of firefighters and EMTs but didn’t realize how physically challenging it is to carry the equipment and gear. “I’m leaning towards volunteering as a firefighter more than a career, because I love to help out and I want to try helping people in numerous different ways,” said Akundi.

Several other girls at the academy also expressed an interest in a firefighting or EMT career once they are out of school.

Julie Tomesheski, a Fairfax County firefighter-paramedic for 10 years, helped with the academy, which she believes gives young girls a chance to imagine anything is possible for them in the world.

Tomesheski said when the girls first arrive, they are shy and quiet, but quickly their confidence builds and they start to work as a team.

“They really have no fear, which is pretty awesome,” Tomesheski said. “They have the thought process that they can do anything, and that’s how it should be — you can do anything if you set your mind to it. That’s what we want to portray at this camp.”

The first academy was held in 2017, Black said; six girls signed up. The number grew to more than 20 girls in 2019 before the academy was put on hold because of the pandemic. The fire department hopes to hold two academy schools for girls next year.

Anne Kramer is a freelance anchor with WTOP Radio. She has been a broadcast journalist for more than thirty years, the last 25 at WBAL Radio in Baltimore. Anne likes reporting stories that make the listener stop and think, maybe even learn something new.