From search and rescue technicians, to engineers, to paramedics and doctors, Virginia Task Force One Urban Search and Rescue sent 65 people to help search for people trapped in the rubble of buildings in Haiti following an earthquake.
Listen now to WTOP News WTOP.com | Alexa | Google Home | WTOP App | 103.5 FM
(1/2) 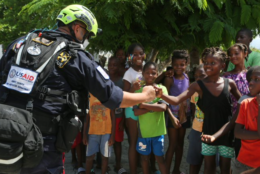 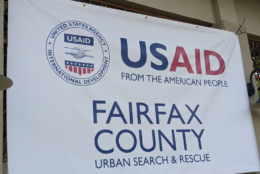 In the hours after a 7.2 magnitude earthquake struck off the coast of Haiti last Saturday, a highly specialized search and rescue team from Northern Virginia was activated and flown to the island nation to help.

From search and rescue technicians, to engineers, to paramedics and doctors, Virginia Task Force One Urban Search and Rescue sent 65 people to help search for people trapped in the rubble of buildings.

The team has, so far, worked in nine cities in the southern peninsula of the Caribbean nation, according to John Morrison, spokesman for the Fairfax County Urban Search and Rescue Team, who is with the team in Haiti.

“While we haven’t found anyone alive yet, we’re still hopeful,” Morrison said.

Morrison said fueling that hope is the fact that in 2015, after a deadly earthquake in Nepal, the team found a person alive several days into their search for victims.

Morrison said 17 members of the team were also dispatched to help in Haiti in 2010, when an earthquake devastated the country that year, as well. He said the big difference between that disaster and this one is that this quake affected fewer multistory buildings and the collapse sites are more spread out. But he said that doesn’t mean there is not a lot of devastation this time.

“There is a tremendous amount of destruction,” Morrison said.

This earthquake has already claimed at least 2,100 lives.

The team is also playing a role in humanitarian efforts in the country, helping local and international aid groups figure out the food, shelter, water and medical needs of the people in affected areas.

He said the team comes prepared with everything thing the need to operate for many days when responding to disasters.

“We don’t want to come into a country, and then require them to provide us with food or water or shelter, so we bring all of that with us. We traveled with 52,000 pounds of equipment,” Morrison said.

Speaking with the residents of Haiti, he said one thing is for sure: They are strong as they deal with not only the recovery from the earthquake, but also Tropical Storm Grace, which brought torrential rains to the country in the days that followed.

“To be hit by an earthquake and then a tropical storm a few days later, they are incredibly resilient,” Morrison said.

Currently, it is unclear when the team will be returning, as there is still a need from them in Haiti. The team’s job may be grueling, but Morrision said all the members are happy to be there to help.