A crowd of residents from across the Washington region gathered Monday evening at a busy spot in Annandale, Virginia, to mourn the dead from the spa shootings in Georgia.
Listen now to WTOP News WTOP.com | Alexa | Google Home | WTOP App | 103.5 FM
(1/4) 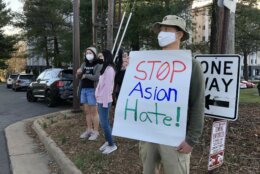 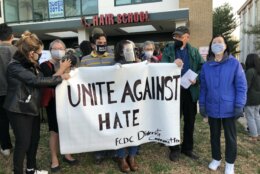 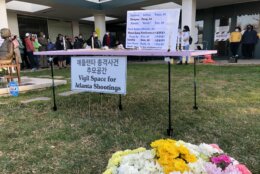 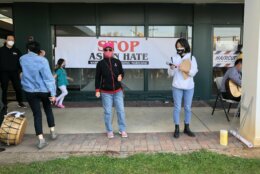 A crowd of residents from across the Washington region gathered Monday evening at a busy spot in Annandale, Virginia, to mourn the dead from the spa shootings in Georgia and to call for an end to hate crimes targeting Asian Americans.

People brought flowers and lit candles in remembrance of the eight victims shot dead in the Atlanta area, six of whom were women of Asian descent. Some raised signs denouncing hate, and said it was about time the nation acknowledged racism against Asians and Pacific Islanders.

“I hope it stays on the radar, and I hope it doesn’t take a tragedy again for people to say we should do something about that,” said Karla Moon of Arlington. “Racism in the U.S. has a long standing history and something has to change.”

The sounds of traffic on the Little River Turnpike mingled with the sound of traditional Korean drums and gongs as participants honored the dead and vowed to fight against racism.

“Seeing this diverse group of people coming out in support of our community is heartening, and I think that’s a sign of positive change,” said Danny Lee, a D.C. resident.

The vigil was organized by several community-led groups including Asian American LEAD, the Korean-American Women’s Association of the USA and the Justice for Muslims Collective.

“Our goal is to ensure that all of us come together as Americans and say ‘no more hate against anyone,'” said Virginia Del. Mark Keam, D-Fairfax, who was in attendance.