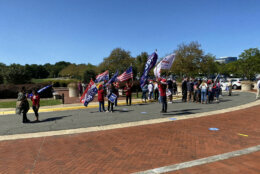 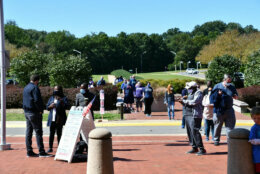 The line for an early in-person polling site in Fairfax, Virginia was temporarily crowded by supporters of President Donald Trump on Saturday afternoon.

Anthony Tilghman, a journalist with the Washington Informer, told WTOP that he saw about 100 people sporting Make America Great Again apparel and waving flags with Trump’s name on it in the parking lot of the Fairfax County Government Center around noon on Saturday.

Tilghman said that roughly 75 of the Trump supporters soon made their way toward the front of the government center and congested the voting line that stretched into the parking lot due to social distancing guidelines. He added many of them weren’t wearing masks.

“They start coming over to the actual voting site and then they was just yelling ‘four more years,'” Tilghman told WTOP.

As you can see here they are blocking the entrance to the voting site. #EarlyVoting #VA #FairFax pic.twitter.com/KJ6fbLdP3G

Tilghman said that the 50 or so people who were in line waited for an election official to make their way through the crowd before escorting them inside.

He added that he didn’t see any new arriving voters turn away from the polling place because of the demonstrators, but they did try to walk around the group and get the attention of an election official.

“If I was a voter and I saw a whole bunch of MAGA people in the parking lot blocking the polling site, I would’ve been a little intimidated too,” Tilghman told WTOP.

Extra security came out after about 45 minutes and caused a large majority of the crowd to disperse, per Tilghman.