The number of pedestrians dying in crashes in this part of the D.C. area is higher than the number of murders, and the police chief is pleading with people to pay attention to their surroundings.
Listen now to WTOP News WTOP.com | Alexa | Google Home | WTOP App | 103.5 FM

Officials in Fairfax County, Virginia, where the death rate for pedestrians exceeds the murder rate, are asking people to not be distracted while on the road.

“Put down your devices. Put your head on a swivel [while] behind the wheel and while you’re out on the pathways, the sidewalks, crossing the streets,” Fairfax County police Chief Ed Roessler said Tuesday.

Roessler was among local leaders helping launch the region’s spring “Street Smart” campaign to help prevent cyclists and pedestrians from being killed by drivers on D.C.-area roadways.

“The combination of education, and advertising, and enforcement have shown to change behavior over the years for the better,” said John Saunders, director of the Virginia Highway Safety Office.

“To heighten pedestrian and bicycle safety awareness, the ‘Street Smart’ campaign will be targeting priority areas in Virginia, Maryland and D.C. between now and the end of May,” he said.

In Fairfax County, such fatalities have recently outpaced homicides: In 2018, 16 were killed in crashes, while 13 were victims of homicide. So far in 2019, there have been eight fatalities and three homicides in the county.

The risk is high in D.C. as well, and authorities urged extra caution when behind the wheel there.

“We encourage people to take a little extra time getting through the District of Columbia,” said Evertt Lott, District Department of Transportation deputy director. “Slow down and stop for people in crosswalks. Focus on driving; put your cellphones away. Look twice before you make a turn, and yield to people crossing. Give people on bikes room to ride and at least 3 feet when passing.”

Also, beware the dangers of breakdowns and post-wreck responses.

“We’ve seen many crashes in Maryland where individuals have either been in a crash, or their vehicle is non-operation and, unfortunately, they’re not pulling over far enough on the roadway, and when they’re exiting their vehicle, they’re being struck by another driver,” said Maryland Motor Vehicle Administrator Christine Nizer.

When you’re on a highway and you become a pedestrian, Nizer said you have to make sure you get as far off the roadway as possible.

“Please stay in your car until law enforcement or emergency medical services arrive, because there’s no safe place to be, whether it’s on a highway or in a roadway like this,” Nizer said, referencing Richmond Highway in Hybla Valley. 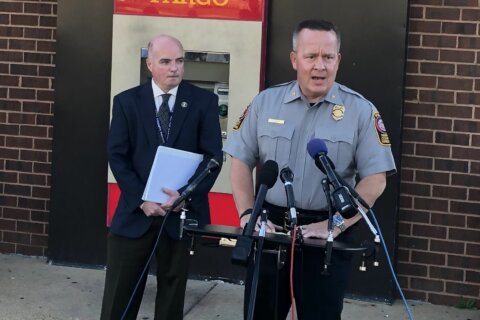