The dockless app-based shared scooters are already on the streets in Alexandria, Arlington and the District. And these scooters will likely come to Fairfax County despite concerns from county leaders.
Listen now to WTOP News WTOP.com | Alexa | Google Home | WTOP App | 103.5 FM

The dockless app-based shared scooters are already on the streets in Alexandria, Arlington and the District. The scooters have also been showing up on the borders of those areas, including parts of Fairfax and Montgomery counties despite no official permission to operate there.

“Scooter use has just taken off exponentially,” said Chris Wells, Fairfax County cycling and pedestrian program manager. “They are a mobility-alternative to walking … and they’ll likely expand more significantly in Fairfax County.”

The county has little power to regulate the scooters right now, since state law permits them in areas that do not control their own roads.

“Electric scooter companies can operate in Fairfax County today, all they would need is a BPOL [business] license,” Wells said.

That could change in this winter’s General Assembly session, where a number of bills are expected to address dockless bike share and app-based shared electric scooter operations.

Arlington and Alexandria have additional powers since they control their own roads, but in Fairfax County — and most other counties in the state — the Virginia Department of Transportation is responsible for roads and sidewalks.

In Richmond and Hampton Roads, cities have impounded app-based shared scooters that began operating without permission.

Virginia law allows stand-up scooters with small motors on any road with a speed limit of 25 mph or less.

Wells and several supervisors expressed safety concerns due to some people who have been injured using the scooters.

“No restrictions on helmets, no age restrictions, and we’re seeing that there can be damage and injuries … This sounds like sort of the wild west out there,” Supervisor Linda Smyth said.

Most of the companies do set age restrictions on users, even though state law does not.

There has been no similar effort to limit cars in the county, despite numerous fatal crashes.

Other concerns cited in a presentation to the board of supervisors’ Transportation Committee include trespassing by people looking for scooters that show up on an app’s map, the time required to deal with regulations, education and impoundment of abandoned scooters, and any potential injuries to users.

The positives of the scooters cited in the presentation include easy access and the extensive use by groups typically underserved by transportation options.

“I would say electric scooters are probably inevitable, and, in my opinion will be appropriate in the county in the future when we have the right combination of infrastructure, regulation, consumer acceptance and public safety,” Wells said.

Among the limited powers the county has today, it has the authority to ban scooter use on certain sidewalks and to regulate any noise from the scooters.

“We need to be careful not to wait too long to figure out how we’re going to handle this. It is already a big issue in Mason District,” Supervisor Penny Gross said.

An abandoned Bird scooter had been sitting in the lobby of the government center in her district for days, she said.

“We’re getting lots of calls about scooters either about going too fast, abandoning them, what’s happening in the neighborhoods, and these are neighborhoods that are not used to having any of this,” Gross said.

Virginia could establish a committee to set statewide guidelines for the scooters, Supervisor Jeff McKay said, which he hopes would also address broader concerns about things like shopping carts left along the sides of the road.

“Any regulations we put in place likely have to have state enabling legislation put in place first, and so that’s part of the challenge we face as a county that Arlington and Alexandria aren’t facing because they’re controlling their own right of way,” McKay said.

The county is separately considering other changes to address other parts of its transition in many areas to more of a city than a suburb, including whether to plow paved trails people use to walk, bike or take scooters to and from businesses, homes and Metro. 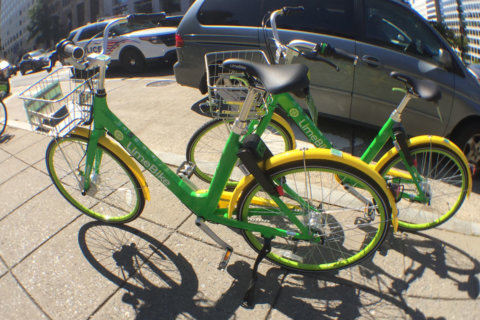