Construction of a new dock for Lakeport Cluster homes has been completed after the previous aging structure was demolished and rebuilt. See photos.
(1/3) 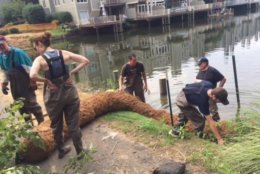 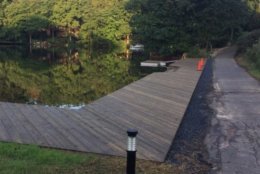 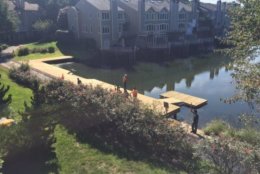 Construction of a new dock for Lakeport Cluster homes has been completed after the previous aging structure was demolished and rebuilt.

Paul Renard, chair of the Lakeport Cluster Association’s dock, said most residents have expressed approval of the new structure, which includes a ramp extension for launching kayaks and canoes, landscaping, and a stronger foundation.

The project was funded by reserve funds from the Lakeport Cluster Association after a 2.5-year design and approval process. Earlier this year, permits required by Fairfax County were delayed due to logistical issues and the county’s classification of the structure as a “critical commercial structure,” which the completion of additional technical requirements.

Work on the project began in June by Virginia Class A. During demolition of the previous structure, the construction team discovered the old foundation was not built particularly well.

“Some of the pilings that should have been driven somewhere between eight and ten feet were only a few feet into the shoreline,” Renard told Reston Now. The previous dock was bowed out in the middle, suggesting that the original dock was not particularly well-built, he said.

Renard and the construction team hope the new dock will last for at least 50 years. With the help of a 33,000-pound excavator, the team drove pilings deep into the foundation.

“They were driven into either the rock below or 11 to 12 feet into the low-bearing soil,” Renard said. “We put in a strong foundation for this dock. I’m hoping it will last 50 to 100 years.”

The team also added a ramp extension that allows canoes and kayaks to be launched closer tot he surface of the water. A system to channel water coming downhill and release it into the lake was installed to decrease water pressure on the dock,

Landscaping by Riverbend and updated lighting to vandalized light fixtures were also completed, along with erosion abatement along the shoreline using materials donated by Reston Association.

The project cost roughly $90,000 for construction and demolition, $15,00 for electrical work to replace vandalized lighting in the community, and $10,000 for landscaping.

Renard said he’s confident the new dock will be a sustainable and beneficial addition to the community.

“It looks beautiful. We had a community dock party in early October and people loved it,” he said.