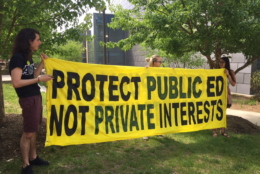 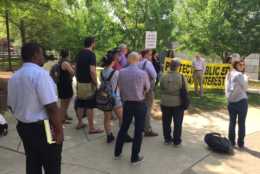 FAIRFAX, Va. — Faculty and students at George Mason University want leaders to take action in response to recent revelations that problematic gift agreements were made with big money donors.

“We want all gift agreements to be made public so we can discern the full extent of the academic violations that have been occurring here,” said Bethany Letiecq, Faculty senator and president of the GMU chapter of the American Association of University Professors.

“We demand that you take actions to redress these violations of academic freedom, so that we can reclaim our university and begin to restore not only our reputation, but our relationship to the public,” Letiecq said.

Past and present donor agreements are requested.

“We suspect that with the $50 million that have been given by the Kochs [brothers Charles and David Koch] in the recent past that there are likely additional agreements on the books that might violate academic freedom principles and academic integrity principles,” Letiecq said.

Faculty Senate Chair Keith D. Renshaw said in an email that they passed a motion “asking for a temporary pause in expending funds from any newly accepted gifts that involve using limited funds (that will ultimately expire) to establish permanent tenure-line positions, until we have more information about the long term costs and other implications of such donations.”

The motion was limited to only gifts of that nature, and only the actual expenditure of the funds (not the acceptance of the gift), Renshaw said.

The Charles Koch Foundation has responded to concerns about donation agreements in an open letter to university partners. The response reads, in part:

“These old grant agreements at George Mason University did not allow us to cause the university to hire certain professors, nor did they allow us to make decisions regarding the curricula or research that professors pursued. These agreements did allow us to have a say in recommending candidates who were considered for the faculty positions we supported. Once the candidates were proposed, the standard university hiring procedures began, and the faculty were free to approve or reject candidates (and they did approve some and reject others).”

The student-led group Transparent GMU is suing the George Mason University Foundation to get it to comply with requests under the Freedom of Information Act.

“We’re asking for donor agreements that would dictate the terms of how money can be spent, who’s hired, and essentially how much control the donor has over how the money is used,” said Gus Thomson, a Transparent GMU member and a junior at the school.

The case was in court Tuesday. “We’re still waiting to hear back from the judge,” Thomson said.

History student and fellow Transparent GMU member Elizabeth Mathews will graduate in a few weeks, but said she intends to continue pushing for transparency as an active alumnus.

She said academic freedom is what’s at stake, adding, “The ability of a university to operate in ways that value empirical evidence, and to stick to its own policies involving transparency and academic freedom.”