Police say Andonis Martinez Turcios, 19, and a 17-year-old boy stole a Honda Accord from the driveway of a Prince William County home.

According to Fairfax County police, they drove to the 6700 block of Hopewell Avenue in Springfield and crashed into several parked cars, causing the car to break down.

When the suspects exited the car, on the 5000 block of Blacksburg Road, they took out a knife and tried to steal a woman’s car as she sat in it.

The suspects were unsuccessful and fled on foot.

Fairfax County police’s helicopter, Fairfax 1, noticed a man that matched the description of one of the suspects walking through a wooded area and guided an officer to him.

The suspect was taken into custody.

The second suspect was found in the 6800 block of Commercial Drive.

Turcios was charged with attempted carjacking, gang participation, possession of stolen property and a hit and run.

The 17-year-old was charged with attempted carjacking, gang participation, possession of stolen property and failure to report an accident.

Below is footage captured by Fairfax 1, Fairfax County police’s helicopter. 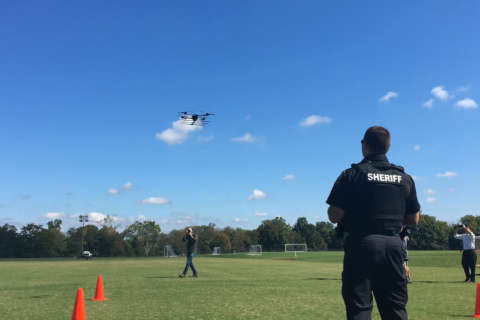 Missing hunter found thanks to a Loudoun County drone