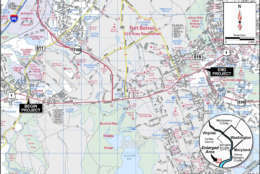 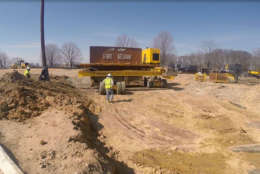 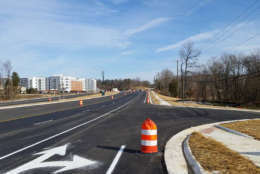 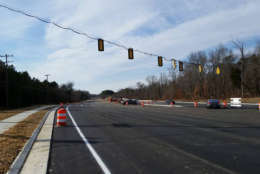 WASHINGTON — A traffic-clogged section of Richmond Highway has been widened from four lanes to six, and local, state and federal officials are set to celebrate the long-awaited project Wednesday morning.

The 3.6-mile widening near Fort Belvoir includes upgrades at intersections and improvements to make it easier and safer to walk or bike along the corridor.

Finishing touches are expected to continue for at least a few more weeks.

Actual work on this stretch began in 2013 after about two decades of wrangling. Base Realignment and Closure changes drove even more traffic to the base, contributing to the Pentagon putting $180 million toward the project.

In addition to other benefits, the work makes it easier for traffic from the Fairfax County Parkway and Interstate 95 to reach Fort Belvoir.

“It has been going on for awhile, but frankly the wait to get even this far was even longer,” Mount Vernon District Fairfax County Supervisor Dan Storck said ahead of the ribbon cutting.

“This is a great opportunity for us to make a huge difference in the lives of folks up and down the corridor — folks in Prince William, folks in Alexandria and everybody in between — and especially for the folks in the Mount Vernon District,” Storck said. “We’ll be relieving congestion, providing safe and convenient bicycle and pedestrian connections for these folks, and we’ll also, and maybe most importantly, provide accommodations for future transit improvements in the corridor, particularly bus rapid transit.”

Fairfax County hopes a second three-mile widening project just to the north — between Jeff Todd Way and Napper Road — could be done by the mid-2020s, which would allow bus rapid transit to begin.

Bus rapid transit lines have their own dedicated lanes that allow the buses to zip past traffic jams. There are typically fewer stops with more amenities than typical buses, with service more similar to a rail line than regular local buses.

“Eventually, we will be hoping to extend Metrorail to the Hybla Valley area [from Huntington] … but this will provide space for us to be able to include BRT, bus rapid transit,” said Fairfax County Board of Supervisors Chairman Sharon Bulova.

That “eventually” would be a very long way off, so in the meantime Bulova said the current projects are really good news for people who use Route 1 near Fort Belvior.

Storck said the road has finally come into this century.

“The biggest difference is that it looks like a modern highway, not like a 1950s or ‘60s highway,” Storck said. “That means it’s wide, it’s safe, it has bicycle trails and sidewalks, it has amenities in terms of the bridges and the gutters, and even the landscaping around it looks very modern and 21st century. And it mostly has the ability to take more capacity, and we have mass transit which we didn’t have before.”

“This is a very sensitive area where there are historic properties such as Mount Vernon and Gunston [Hall], so we needed to be sensitive about protecting those properties,” Bulova said.

In addition to the projects in Fairfax County, the Virginia Department of Transportation is working on additional Route 1 widening just to the south in Woodbridge. That project is scheduled to be completed in 2019.