With the mayor of the City of Fairfax set to step down Thursday, some are critical of the way in which the City Council is dealing with the resignation.
Listen now to WTOP News WTOP.com | Alexa | Google Home | WTOP App | 103.5 FM

WASHINGTON — City of Fairfax Mayor Richard “Scott” Silverthorne plans to resign Thursday, and the city council’s decision to hold a closed-door meeting is raising questions about the group’s transparency in selecting a new mayor.

Residents who had hoped for an open meeting Tuesday night expressed anger that the council left the dias to consider the legal challenges ahead, as Silverthorne plans to step down after being arrested last week on drug charges, including the felony charge of drug distribution.

After the private meeting,  City Council members and acting Mayor Jeffrey Greenfield told reporters the council will hold another meeting Aug. 16, to schedule a special election and discuss whom to appoint as interim mayor.

“We recognize the importance of public input, and the need to have additional discussion next week,” Greenfield said. “It is an open opportunity for folks to comment.”

Silverthorne, 50, was recently elected to his third term as mayor. A son of former mayor Frederick Silverthorne, he served nine terms on the council before being elected mayor.

Greenfield said he would not opine on Silverthorne’s decision to resign, or its timing, but said the council will concentrate on the city’s business when its session begins in September.

“We are moving forward with the goals that the council has set, and establish some calm in the city of Fairfax, because lord knows we’ve had a little bit of turmoil over the last several days,” Greenfield said.

Silverthorne was arrested in an undercover drug sting, after allegedly handing an officer two grams of methamphetamine in a hotel parking lot in Tysons Corner, as part of a group sex plan. 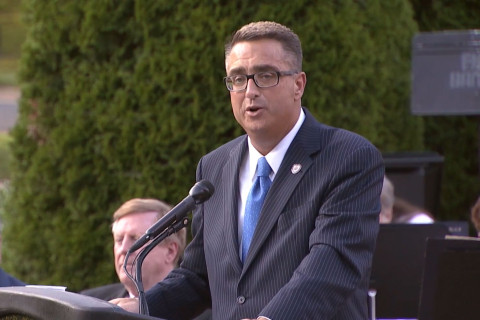