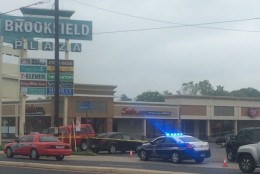 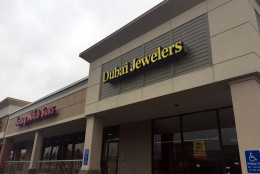 According to Fairfax County police, the Dubai Jewelry store at Brookfield Plaza shopping center was robbed at around 12:20 p.m. Police said the robber shot at an officer after leaving the jewelry shop, triggering  a shoot out with police.

Police said in an emailed statement that the bystander was driving by and was hit by a bullet apparently fired by the robbery suspect’s weapon.

The motorist was taken to the hospital with life-threatening injuries, but the shooting victim’s status was later upgraded to “non-life threatening,” police said.

Police said the robber drove off in a car that crashed at Spring Village Drive and Hampton Creek Way, then carjacked another vehicle,  but crashed that one in the 7600 block of Hooes Road, before running away.

Carlos Campos is an employee at the Jersey Mike’s Subs shop next door to the jewelry store.

“I thought it was a shooter or someone.  I didn’t think it was a cop shooting until I heard someone say that.  I was worried that someone was going to come in here and shoot everyone,” Campos said.

“This one woman was really scared because she just literally walked in the door and the gunshot started going off and she ran in the back.  There was a family of four, too.  The parents were concerned about the children, holding on to them tight,” he said.

“I heard the gunshots and immediately my manager told everyone to get into the back because they were shooting,” Campos said.

Slavko Obuch, employee at Virginia Tire & Auto across the parking lot from the jewelry store, said, “I was on my phone and the next thing I see is there’s probably six or seven [police] cruisers driving through here and then I hear ambulances.”

WTOP’s Dennis Foley and Tiffany Arnold contributed to this report.