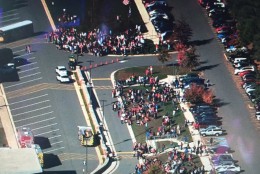 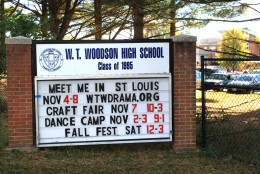 UPDATE:
WASHINGTON – The official cause of a fire inside a Fairfax County high school has been determined to be a chemical demonstration during a Friday morning class.

The fire has been ruled an accident and caused as much as $7,500 in damage, according to the Fairfax County Fire and Rescue Department.

Both patients are in fair condition at MedStar Washington Hospital Center.

#BREAKING 1 of 2 students airlifted after chem lab fire at #WoodsonHS is in critical condition. Other in stable @nbcwashington

Fire Cheif says the students in the #WoodsonHS chem classroom were observers while teacher did experiment,fire then occurred. @nbcwashington

Fire Cheif says the students in the #WoodsonHS chem classroom were observers while teacher did experiment,fire then occurred. @nbcwashington

Stay with WTOP for updates to this developing story.

EARLIER:
WASHINGTON — Two students were airlifted from a Fairfax County high school to D.C. burn centers after a fire broke out during a teacher-led chemistry exercise, injuring three other students and the teacher Friday morning.

The two W.T. Woodson students were in serious condition, based on preliminary reports, but were expected to survive. One was taken to MedStar Washington Hospital Center’s burn unit and the other was taken to the burn unit at Children’s National, said Fairfax Fire Chief Richard Bowers.

Three other students were taken to Inova Fairfax Hospital and one science teacher was treated at the scene.

Bowers described the injuries as chemical burns from a chemical fire, which was still burning when firefighters arrived.

All six were in the classroom when the fire broke out about 9:40 a.m. in the science wing. The majority of the class was able to flee the room to the hallway and the sprinkler system held the fire in check until firefighters arrived, Bowers said.

About half of the lab was damaged by the fire, smoke and water. No other parts of the building were damaged, he said.

The roughly 2,000-student school near Fairfax, Virginia, was safely evacuated to the football stadium nearby, where students remained until about 12:30 when they were allowed back into the building. Students were already scheduled for an early 12:55 p.m. dismissal Friday.

Bowers said that the two most seriously burned students are “doing very well” due to the initial treatment they received and because of their quick transport by a county police helicopter.

MedStar Washington reported that the student being treated there was in fair condition. An updated condition for the second seriously injured student was not available.

Bowers described their injuries as exposure burns from either heat, smoke or flames. The biggest risk from burn injuries is infection, he said.

The cause of the fire and the injuries remain under investigation. Police Chief Ed Roessler said that it appears to be an accident and the fire is not being investigated as a crime.

Investigators have begun interviewing witnesses to figure out how the fire started. However they have determined there was no explosion during the teacher-led activity, Bowers said.

Investigators hope to know more about the cause and nature of the chemical fire by Friday night or Saturday morning.

Students were stunned to learn what happened. They exited the building believing that it was just a fire drill but realized something more serious had happened when fire trucks began to arrive.

One student told WTOP that she was in the classroom next door to the damaged chemistry lab. She said a teacher ran in with a burn hole to her shirt and was missing one shoe. She asked for help from her class’ teacher.

Sophomore Christinan Lindley said that he received a text message from one of the less seriously injured students letting him know he was going to be fine.

Students were released for the day about 1 p.m. for a previously planned early dismissal. Friday night’s football game and pre-game activities will continue as planned, school officials said.

The @WTWoodsonHS football game will be held this evening. Please keep those who were injured today in your thoughts. #WoodsonStrong

WTOP’s Andrew Mollenbeck contributed to this report from Fairfax, Virginia, and Megan Cloherty reported from Washington.