Plans for I-66 toll lanes revised to reduce homeowner impact

WASHINGTON — Plans to add high occupancy toll lanes to Interstate 66 between the Beltway and Haymarket have been tweaked a little bit to reduce the impact on homeowners.

The Virginia Department of Transportation’s plan for that 25-mile stretch would create two HOT lanes and three regular lanes in each direction.

The earlier plan could have forced more than 30 families out of their homes, but after a meeting with Dunn Loring-area residents about two weeks ago, design revisions were made that reduce that number to 18 homes at the most.

One way this was done was by moving a proposed flyover ramp.

“What we’ve done is slid the ramp to the east,” VDOT Megaprojects Director Susan Shaw explained at a community meeting Monday night at Oakton High School in Vienna, Virginia.

“The other major change that’s been made is related to the storm water management ponds,” said Renee Hamilton, Deputy District Administrator for VDOT in Northern Virginia.

She says the footprint for those planned ponds has been reduced, and more changes are likely.

“We’re not done.  We’re still at the beginning stages.  We are going into our public hearings at the end of the month.  We will gain more input from the public and our designers will continue to refine the footprint of this project.”

Four public hearings on the updated plan will be held May 27 in Fairfax, May 28 in Vienna, June 2 in Haymarket and June 3 in Centreville.

WTOP asked residents Jim and Susan Larocca why they came to Monday’s meeting.

“It’s really the noise and how long is it going to last, and are we going to be looking at a flyover (ramp) at the end of our street, we don’t know,” said Susan.

“We’re encouraged to see so many people out here and getting involved, and I that that’s making a difference.  I think the new set of plans is much better than the original ones,” said Jim.

Resident Patty Avent and her husband have lived in the Vienna area for 40 years.

“We’re concerned about where the road is going, the houses that are being lost, but personally, for us, we’re worried about our grandchildren at Stenwood Elementary School,” she said.

The previous I-66 design called for taking some playground space from that school for the project.

VDOT says more information about the updated design will be made available Tuesday online. 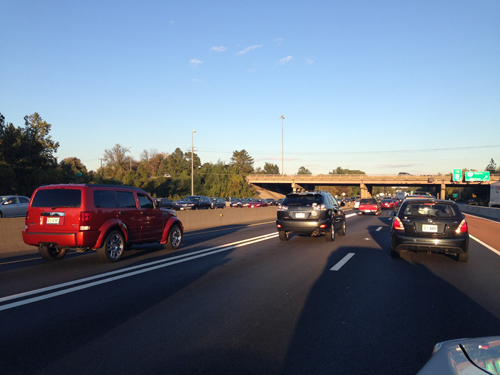 Deal close to save homes from I-66 widening