The two discussed the company’s plans to comply with the bloc’s Digital Services Act, which is set to take effect for the biggest online companies in September. The act is a set of sweeping rules that will require platforms to reduce harmful online content and combat online risks.

“With younger audiences comes greater responsibility,” Breton said, according to a readout of the call. “It is not acceptable that behind seemingly fun and harmless features, it takes users seconds to access harmful and sometimes even life-threatening content.”

Breton added that, with millions of young users in Europe, TikTok has a “special responsibility” to ensure its content is safe.

TikTok is hugely popular with young people but its Chinese ownership has stoked fears that Beijing could use it to scoop up user data or push pro-China narratives or misinformation. TikTok is owned by ByteDance, a Chinese company that moved its headquarters to Singapore in 2020.

Earlier this month, Shou met four other officials from the EU’s executive Commission in Brussels to discuss concerns ranging from child safety to investigations into user data flowing to China. In the U.S., at least 22 states, the military and Congress have banned the TikTok app from government-issued devices.

A London-based spokesperson for TikTok didn’t respond immediately to a request for comment. The company’s Brussels-based director of public policy and government relations, Caroline Greer, said on Twitter that Breton’s talk with Shou was a “good exchange” and that the “safety of our users is paramount.”

Breton said he is also concerned about allegations TikTok is spying on journalists and transferring reams of personal user data outside of Europe, in violation of the 27-country bloc’s strict privacy rules.

Bretaon said he “explicitly conveyed” to Shou that TikTok needs to “step up efforts to comply” with EU rules on data protection, copyright as well as the Digital Services At, which includes provisions for heavy fines or even a ban from the EU for repeat offenses that threaten the people’s lives or safety.

“We will not hesitate to adopt the full scope of sanctions to protect our citizens if audits do not show full compliance,” he said.

Greer said TikTok “welcomed the opportunity” to reiterate its commitment to the Digital Services Act and outlined efforts to comply with EU rules on privacy and a voluntary code of practice on disinformation for tech companies. 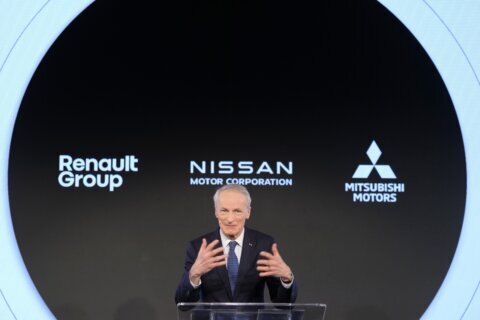