QAMISHLI, Syria (AP) — Baran Ramadan Mesko had been hiding with other migrants for weeks in the coastal Algerian city of Oran, awaiting a chance to take a boat across the Mediterranean Sea to Europe.

Days before the 38-year-old Syrian Kurd was to begin the journey, he received news that a smuggler boat carrying some of his friends had sunk soon after leaving the Algerian coast. Most of its passengers had drowned.

It came as a shock, after spending weeks to get to Algeria from Syria and then waiting for a month for a smuggler to put him on the boat.

But having poured thousands of dollars into the journey, and with his wife and 4- and 3-year-old daughters counting on him to secure a life safe from conflict, the engineer-turned-citizen journalist boarded a small fishing boat with a dozen other men and took a group selfie to send to their families before they went offline.

After a 12-hour overnight journey, Mesko made his way to Almería, Spain, on Oct. 15, and then flew to Germany four days later, where he is now an asylum seeker in a migrant settlement near Bielefeld. He’s still getting used to the cold weather, and is using a translation app on his phone to help him get around while learning German. He said he’s hopeful his papers will be settled soon so his family can join him.

At least 246 migrants have gone missing while trying to cross the western Mediterranean into Europe in 2022, the International Organization for Migration says. In the past few years, thousands more have perished making the dangerous sea voyage.

Mesko is among a growing number of Syrian Kurds making the journey to Europe on a winding course that includes travel by car and plane across Lebanon, Egypt, Libya, Algeria, then finally by boat to Spain. They say they are opting for this circuitous route because they fear detention by Turkish forces or Turkish-backed militants in Syria if they try to sneak into Turkey, the most direct path to Europe.

According to data from the European Union border agency Frontex, at least 591 Syrians have crossed the Mediterranean from Algeria and Morocco to Spain in 2022, six times more than last year’s total.

A Kurdish Syrian smuggler in Algeria said dozens of Kurds from Syria arrive in the Algerian coastal city of Oran each week for the sea journey.

“I’ve never had numbers this high before,” the smuggler told The Associated Press, speaking on condition of anonymity for fear of arrest by Algerian authorities.

Years of conflict and economic turmoil have left their mark on Syria’s northern areas, home to some 3 million people under de facto Kurdish control. The region has been targeted by Islamic State group militants, Turkish forces and Syrian opposition groups from the country’s northwestern rebel-held enclave. Climate change and worsening poverty spurred a cholera outbreak in recent months.

Like Mesko, many of the migrants come from the Syrian city of Kobani, which made headlines seven years ago when Kurdish fighters withstood a brutal siege by the Islamic State militant group.

The town was left in ruins, and since then, “not much has happened” to try to rebuild, said Joseph Daher, a professor at the European University Institute in Florence, Italy, adding that most development funding went to cities further east.

Recent events in northeastern Syria have given its residents an additional incentive to leave.

Turkey stepped up attacks on Kurdish areas in Syria after a bombing in Istanbul in November killed six people and wounded over 80 others. Ankara blames the outlawed Kurdish Workers’ Party and the U.S.-backed Kurdish militia, the People’s Protection Unit in Syria. Both have denied responsibility.

Since then, Turkish airstrikes have pounded areas across northeastern Syria, including Kobani, further battering its already pulverized infrastructure, and Ankara has vowed a ground invasion.

“I saw my mother trembling in fear and holding my 4-year-old sister to keep her calm,” Shahin said.

He now wants to join the flow of Kurds headed from Syria to Europe.

“I have some friends who found a way to get to Lebanon through a smuggler and go somewhere through Libya,” he said. “I’m not familiar with all the details, but I’m trying to see how I can take that journey safely.”

The operation, which takes weeks and costs thousands of dollars, is run by a smuggler network that bribes Syrian soldiers to get people through checkpoints where they could be detained for draft-dodging or anti-government activism, then across the porous border into Lebanon, the migrants and smugglers said.

There, the migrants typically stay in crowded apartments in Beirut for about a week while awaiting expedited passports from the Syrian Embassy by way of a smuggler’s middleman.

With passports in hand, they fly to Egypt to transit before taking another flight to Benghazi in war-torn Libya before embarking on the journey to Algeria through another network of smugglers.

“We went in vans and jeeps and they took us across Libya through Tripoli and the coastal road and we would switch cars every 500 kilometers or so,” Mesko said.

During the journey across the desert, they had to cross checkpoints run by Libya’s mosaic of armed groups.

“Some of the guards at checkpoints treated us horribly when they knew we were Syrian, taking our money and phones, or making us stand outside in the heat for hours,” he said.

An armed group kidnapped the group of migrants who left before his and demanded $36,000 for their release, Mesko said.

By the time they reached the Algerian city of Oran, Mesko was relieved to take refuge in an apartment run by the smugglers. While they waited for weeks, he and the other migrants spent most of their time indoors.

“We couldn’t move freely around Oran, because security forces are all over and we did not cross into the country legally,” Mesko said. “There were also gangs in the city or even on the coast who would try to mug migrants and take their money.”

Human rights groups have accused the Algerian authorities of arresting migrants, and in some cases expelling them across land borders. According to the U.N. refugee agency, Algeria expelled over 13,000 migrants to neighboring Niger to its south in the first half of 2021.

Despite his relief at arriving safely in Germany with a chance to bring his wife and girls there, Mesko feels remorse for leaving Kobani.

“I was always opposed to the idea of migrating or even being displaced,” he said. “Whenever we had to move to another area because of the war, we’d come back to Kobani once we could.”

Mesko spends much of his time at asylum interviews and court hearings, but says he’s in good spirits knowing he’s started a process he only dreamed of months ago. He hopes to be granted asylum status soon, so his wife and daughters can reunite with him in Europe.

“Syria has become an epicenter of war, corruption and terrorism,” he said. “We lived this way for 10 years, and I don’t want my children to live through these experiences, and see all the atrocities.”

This story was first published December 18, 2022. It was updated on December 21, 2022 to reflect the fact that Syrian nationals are required to obtain a visa to enter Egypt, and that the Syrian Kurdish migrants documented in the report said they transit through Egypt, without entering the country.

How will EU ban and West’s price cap on Russian diesel work? 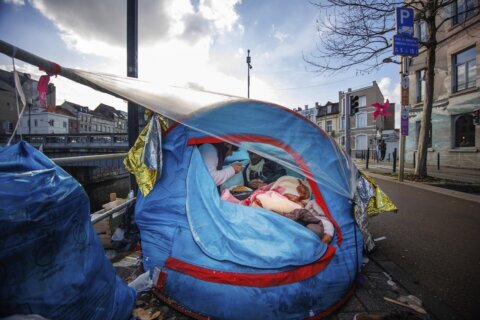