Argentina star Lionel Messi, Brazil’s Neymar and Mbappe all started against Auxerre as PSG maintained its five-point lead in the French league over second-place Lens.

Messi and Neymar came off with about 15 minutes left but Mbappe played the full match, despite coming off near the end last weekend with muscle fatigue. Mbappe joins up with defending champion France’s squad on Monday before flying out to Qatar on Wednesday.

“As soon as my players had made the difference, I focused on managing them,” PSG coach Christophe Galthie said. “I quickly made changes to protect them.”

PSG rested Brazil defender Marquinhos because of some muscle discomfort.

PSG’s players didn’t hold back against Auxerre, despite the fear of a late injury, as the opening goal came after 10 minutes.

“I ask the people I work with to be demanding, not to fall into a comfort zone … We had to win, Lens has been on an incredible run,” Galthie said. “I wanted to pick the most competitive team possible. The players responded very well today, we were serious and diligent.”

Messi lofted a clever pass over the defense for Portugal defender Nuno Mendes sprinting down the left, and his pass was volleyed in by Mbappe for his league-leading 12th goal.

The goal was awarded following a video review after Neymar handled the ball moments earlier in Auxerre’s penalty area.

Neymar was bundled over in the 30th after a heavy challenge but got straight back up to continue playing.

The World Cup-bound Mendes broke free again down the left and his cross was deftly turned in by forward Carlos Soler in the 51st. Right back Achraf Hakimi made it 3-0 soon after.

Hakimi, one of the main players in Morocco’s World Cup squad, latched onto Soler’s pass and sprinted clear from halfway to beat goalkeeper Benoit Costil.

Central defender Presnel Kimpembe, who has played only one hour of football since sustaining a hamstring injury on Sept. 18, was on the bench and came on for the last 15 minutes.

“I had it in mind for him to play today,” Galthie said. “I didn’t want to start him because it’s a long time since he played.”

Attacking midfielder Renato Sanches added the fourth goal with an angled shot from the right that bounced in off the left post. Hugo Ekitike made it 5-0 with his first goal for the club.

Defender Sead Kolasinac scored in the eighth minute of stoppage time as fourth-place Marseille won 3-2 at Monaco to remain one point behind third-place Rennes. Monaco dropped to sixth spot.

Veteran Chile forward Alexis Sanchez put Marseille ahead in the 35th with a free kick from the edge of the penalty area.

Striker Wissam Ben Yedder equalized for Monaco moments before the interval with an assured Panenka-style penalty and attacking midfielder Aleksandr Golovin then set up Kevin Volland in the 72nd to make it 2-1 to Monaco.

Seventh-place Lille won 1-0 at home to bottom-side Angers with central defender Tiago Djalo scoring late in the first half.

Also, midtable Reims drew 1-1 at Montpellier, which equalized in stoppage time through midfielder Sacha Delaye’s first goal for the club. He is the son of former Montpellier stalwart midfielder Philippe Delaye, who made nearly 250 league appearances for the southern club.

Nantes rallied from 2-0 down in the last 20 minutes to draw 2-2 at home with Ajaccio, and Brest moved above Auxerre into 16th place with a 2-1 home victory against Troyes.

The league takes a World Cup break and resumes on Dec. 28. 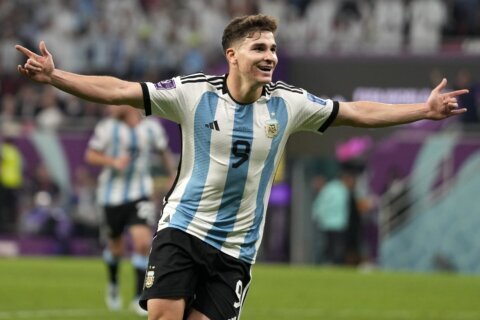