Key dates in the life of Charles, Britain’s new king

Nov. 14, 1948 — Born on the royal estate at Sandringham, first child of Princess Elizabeth and Prince Philip.

April 8, 2005 — He marries Camilla in a civil ceremony; she takes title of Duchess of Cornwall.

Dec. 2011 — Hospitalized for treatment for a blocked coronary artery.

June 2013 — Admitted to the hospital for exploratory operation on his abdomen.

July 22, 2013 — Becomes grandfather for the first time with the birth of Prince George, William and Kate’s oldest child. Two more children — Charlotte and Louis — follow for the couple.

May 10, 2022 — Charles stands in for Queen Elizabeth II for the first time during the state opening of Parliament, after she had to pull out of the event, citing mobility problems. The delegation of the role, one of the queen’s most important duties, was seen by many as the clearest sign that a transition of the monarchy was underway.

This story corrects the date of the queen’s death to Sept. 8.

Follow all AP stories on the British royals at https://apnews.com/hub/queen-elizabeth-ii. 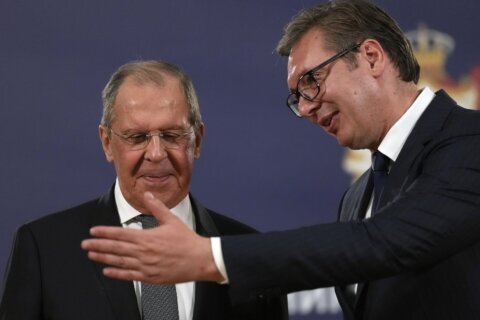