COPENHAGEN, Denmark (AP) — Denmark’s largest energy company said Russia cut off its gas supply Wednesday because it refused to pay in rubles, the latest escalation over European energy amid the war in Ukraine.

Russia previously halted natural gas supplies to Finland, Poland and Bulgaria for refusing a demand to pay in rubles. And on Tuesday, the tap was turned off to the Netherlands.

Danish energy company Ørsted said it still expected to be able to serve its customers.

“We stand firm in our refusal to pay in rubles, and we’ve been preparing for this scenario,” Ørsted CEO Mads Nipper said. ”The situation underpins the need of the EU becoming independent of Russian gas by accelerating the build-out of renewable energy.”

In response to Western sanctions imposed against Russia for its invasion of Ukraine, Russian President Vladimir Putin signed a decree saying foreign buyers needed to pay in rubles for Russian gas as of April 1.

Moscow offered customers receiving its natural gas to establish an account in dollars or euros at Russia’s third-largest bank, Gazprombank, then a second account in rubles. The importer would pay the gas bill in euros or dollars as specified in contracts and direct the bank to exchange the money for rubles.

“This is totally not acceptable,” Danish Prime Minister Mette Frederiksen said. “This is a kind of blackmailing from Putin. We continue to support Ukraine, and we distance ourselves from the crimes that Putin and Russia commit.”

Russian state gas giant Gazprom confirmed Wednesday that it stopped gas supplies to Shell Energy Europe and Denmark’s Ørsted after the two companies refused to abide by the ruble-payment mechanism.

Gazprom said it hadn’t received payments from either company for gas supplied in April and therefore was halting deliveries.

The Danish Energy Agency said that in the first 18 weeks of 2022, Russian gas amounted to approximately 25% of EU gas consumption. The agency said that Denmark losing its supply would not have immediate consequences

“We still have gas in Denmark, and consumers can still have gas delivered,” Kristoffer Böttzauw, head of the Danish Energy Agency. said in a statement Monday. “But we have plans ready if the situation worsens.”

Since there is no pipeline going directly from Russia to Denmark, Russia will not be able to directly cut off gas supplies to Denmark, which still will be able to get it, Ørsted said. Russia’s move means that Denmark must purchase more gas on the European gas market, the company added.

Denmark has been a net exporter of natural gas for many years, but because its Tyra field in the North Sea is being renovated, the country currently imports about 75% of its gas consumption via Germany. The Tyra field is expected to reopen in mid-2023.

In Denmark, some 380,000 households use natural gas for heating via gas boilers, the agency said.

On Tuesday, the leaders of the European Union agreed to cut around 90% of all Russian oil imports over the next six months. The 27-nation bloc has relied on Russia for 25% of its crude and 40% of its natural gas.

20 suspects in Paris terrorist attacks trial: Who they are 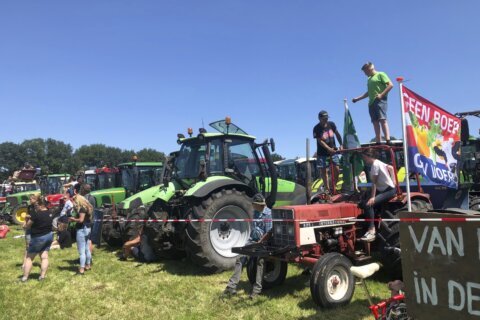