LONDON (AP) — Portuguese-British artist Paula Rego, who created bold, visceral works inspired by fairy tales, her homeland and her own life, has died at age 87.

The Victoria Miro Gallery, which represents Rego, said Wednesday that she died “peacefully this morning, after a short illness, at home in north London, surrounded by her family.”

Rego’s work spanned styles from naturalism to the abstract, and often included vivid, unnerving depictions of people, animals or both. Among her best-known works are the “Dog Woman” pastel drawings portraying women in a series of canine poses.

Born in Lisbon in 1935, Rego was sent to school in England and went on to study art at the Slade School in London. At the time, Portugal was governed by Antonio Salazar’s dictatorship and women were second-class citizens without the vote.

Rego said her father had told her: “Leave Portugal. This is no country for a woman.”

In the 1960s Rego exhibited alongside rising young artists such as David Hockney as part of the London Group collective. One early painting, the semi-abstract “Salazar Vomiting the Homeland,” excoriated the dictatorship. Producing it in Portugal at the time would have landed her in jail.

Though she lived in Britain for decades, Rego’s work was infused with the colors and stories of her homeland, and drew on her childhood in conservative Portugal under the Salazar regime.

“Our infancy is always with us, isn’t it?” Rego told The Associated Press in a 2014 interview.

On the Portugal of her childhood, she said: “It was a fascist state for everyone, but it was especially hard for women. They got a raw deal.”

A feminist who helped change the way women are depicted in art, Rego challenged expectations of beauty and explored subtexts of sex and violence in Portuguese folk tales and nursery rhymes.

A staunch champion of human rights, she memorably produced a series of paintings entitled “Abortion,” shortly after Portugal had rejected pregnancy termination on demand in a 1998 referendum. In 2008-2009 she created another series, “Female Genital Mutilation.”

After Portugal’s transition to democracy in the 1970s, Rego became one of the country’s most famous artists. A museum of her work opened in the seaside town of Cascais in 2009.

The Portuguese government decreed a day of national mourning, when flags on government buildings will fly at half-mast in the artist’s honor.

“Her paintings, drawings and engravings contain powerful images that will stay with us and with generations to come,” the government said in a statement. It added that Rego “was an artist who was acutely alive to the reality of our society.”

Portuguese President Marcelo Rebelo de Sousa said Rego was the country’s greatest modern artist of the past three decades. He recalled that on a visit to Rego’s London studio in 2016 he “witnessed the enchanting and disturbing power” of her work.

Rego also was renowned in Britain, where she was the first artist-in-residence at the National Gallery in London. Tate Britain held a major retrospective of her work last year.

Tate director Maria Balshaw called Rego “an uncompromising artist of extraordinary imaginative power, who uniquely revolutionized the way in which women’s lives and stories are represented.”

Rego’s work is in the collections of the British Museum, the National Gallery, the Metropolitan Museum of Art in New York, the Art Institute of Chicago and the Yale Center for British Art.

In 2010, Queen Elizabeth II made Rego a dame, the female equivalent of a knight.

Rego was married for 29 years to British artist Victor Willing, who died in 1988. She is survived by their children Nick, Caroline and Victoria, and by several grandchildren and great-grandchildren. ___ 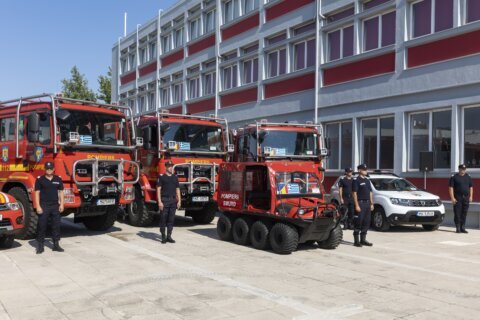